Russia and China Want to Build a 'Non-Nuclear' Submarine Together 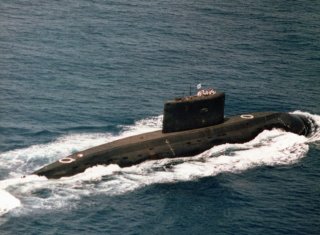 According to a recent announcement by the Russian state-controlled media outlet RIA Novosti, Moscow and Beijing are teaming up in yet another military engineering venture, this time a submarine.

It is not the first time that Moscow and Beijing have linked hands. China bought Russia’s very cutting-edge S-400 air defense system which is possibly the world’s most advanced. China has also imported Russia’s capable Sukhoi Su-35 fighter. China continues to struggle manufacturing advanced airfare engine designs, and it was suspected that China hoped to copy both the Su-35 airframe and its advanced engines in order to give the domestic Chinese aerospace industry a leg up, much to Moscow’s consternation.

What exactly would a Chinese-Russian submarine look like? A non-nuclear design makes sense for both navies. The Russian Navy, while powerful on paper, is more of a close-to-home force rather than a blue water navy capable of extended operations far from shore. A smaller, but advanced, attack submarine design is right up the Russian Navy’s alley.

So too would such a submarine meet China’s goals. While the People’s Liberation Army Navy is indeed interested in expanding their power projection capabilities farther and farther away from Chinese waters, a small attack submarine could be incredibly useful in the South China Sea in the not so distant future. The region’s shallow waters and relatively confined space would play well to small attack submarines that could be resupplied by Chinese-controlled islands.

As one naval expert pointed out, there are several areas where China may be ahead of Russia, propulsion being one of them. Submarine designs are shifting towards AIP, or Air Independent Power, a technology that allows non-nuclear submarines greater underwater endurance and, in some cases, a reduced acoustic signature.

Batteries might also be an area where Russian shipyards could learn a thing or two from China. Lithium-ion batteries like those in smartphones are much more energy-dense than traditional lead-acid batteries such as those used in cars and is a field that China has extensive experience in.

Yet another possibility could be a submarine with Chinese guts and Russian teeth. Russia’s submarine weapons are amongst the most advanced in the world and China would no doubt like to have access to Russian weapon designs, if not actual examples which could be reverse-engineered for Beijing’s own benefit. There are quite a few questions that still remain about this interesting joint venture. Keep an eye on this topic in the future as new information comes to the surface.