Russia and Turkey Are the Winners in Syria 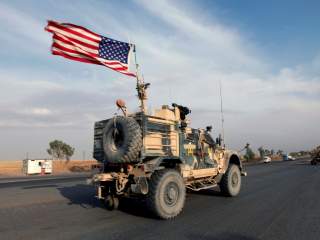 Key point: The withdrawal of U.S. forces was exactly what Ankara and Moscow wanted.

After more than six hours of talks, Russian President Vladimir Putin and Turkish President Recep Tayyip Erdogan emerged in Sochi, Russia, on Oct. 22 with an agreement to establish a "Syria Safe Zone" along the Syrian-Turkish border. While the agreement serves the interests of both Moscow and Ankara, the other parties involved in northern Syria will find much to dislike about the deal — something that will cloud its implementation.

The agreement is a significant victory for Ankara, as it cements the Turkish military's gains as part of Operation Peace Spring between the towns of Tal Abyad and Ras al-Ayn and stipulates the withdrawal of the People's Protection Units (YPG) from nearly all the remaining areas of the border up to a depth of 30 kilometers (18 miles). In their place, joint Russian-Turkish units will begin patrolling up to a depth of 10 kilometers from the border. This allows the Turks to preserve their military gains in three previous operations while further driving the YPG away from the border without having to resort to more military operations. The deal also serves Moscow's interests by furthering Turkey's dependence on Russia in Syria, extending Russian influence in the north and solidifying Moscow's role as a key stakeholder in the country.

Many other actors in the conflict, however, will stand to lose from the agreement. While pleased that it will finally bring large tracts of the northeast back under its control, the Syrian government will undoubtedly worry at Turkey's entrenched presence on its soil and the closer relationship that Russia, its nominal protector, is striking with its longtime adversary, Turkey. And after being effectively frozen out of the negotiations, Iran will also not be happy that Moscow and Ankara essentially ignored its demands for a Turkish withdrawal. At the same time, it too will fear that Russia's rising role in Syria will further impede its own influence in the country.

Finally, the Syrian Democratic Forces (SDF) — of which the YPG forms the backbone — is almost sure to resist the agreement, especially as it requires the group to abandon key urban areas such as Kobani, Tal Rifat and Manbij. In fact, the Russians have already issued an ultimatum, stating that Moscow won't protect the SDF if it doesn't abide by the agreement and withdraw.

Given that the Syrian government, Iran and the SDF have much to grumble about in the Russian-Turkish deal, the agreement is likely to encounter headwinds going forward. Even if the SDF does withdraw under pressure — and that remains far from certain — the group will at least attempt to maintain pressure on the Turks through an insurgency, potentially placing Russian patrol forces under threat. Meanwhile, the Iran-backed Syrian government will likely skirmish and clash with Turkish and Turkish-backed forces (as it has done in other so-called safe zones like Idlib), complicating Russian efforts to stabilize the border and transition to political talks. As a result, Moscow and Ankara's plan for managing Syria's north is unlikely to end the country's conflict anytime soon.

In Syria, Russia and Turkey Split the Spoils is republished with the permission of Stratfor Worldview, a geopolitical intelligence and advisory firm.