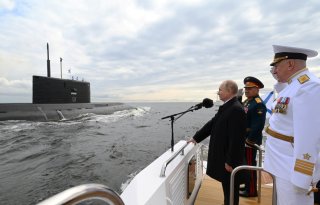 The Russian, Chinese, and Iranian navies will soon carry out joint drills, according to top military officials.

"The Pacific Fleet’s naval group made up of the Guards Order of Nakhimov missile cruiser Varyag, the large anti-submarine warfare ship Admiral Tributs and the large sea tanker Boris Butoma has anchored in the roadstead of the Chabahar port in the Islamic Republic of Iran,” said the press office of the Russian Navy’s Pacific Fleet. The Russian Navy added that a Russian delegation will be involved in “a planning conference on holding joint naval drills of combat ships of Russia, Iran, and China.”

According to Russian media reports, the Pacific Fleet task force departed from the eastern Russian city of Vladivostok in late 2021. The statement added that the task force will call at several ports, including one belonging to the Republic of Seychelles. The press release did not provide a full itinerary, and it is unclear exactly where all of the drills will be held and what the naval maneuvers will entail.

The Pacific Feet is one of Russia’s five principal naval formations. Russia’s Northern and Pacific Fleets are widely regarded as the country’s most powerful naval forces. The latter is scheduled to receive a slew of new Borei-A nuclear ballistic missile submarines and Yasen-M cruise missile submarines. The Pacific Fleet will add at least three of Russia’s latest Admiral Gorshkov-class frigates, which incorporate stealth technology and will reportedly support the upcoming Tsirkon hypersonic anti-ship cruise missile.

The drills come amid mounting military tensions between Russia and Ukraine. Russia’s buildup on the Ukrainian border has led White House officials and Western intelligence authorities to warn that Russia could strike at any moment. "We know that there are plans in place to increase that force even more on very short notice," said Secretary of State Antony Blinken on Wednesday. "And that gives President Putin the capacity, also on very short notice, to take further aggressive action against Ukraine," Blinken added.

Warning of the potential implications of a Russian invasion, retired U.S. Army Gen. Curtis Scaparrotti said this week that China and Iran are watching closely to see how the United States handles the Ukrainian crisis. As reported by USNI News, Scaparrotti explained that Washington’s behavior vis-à-vis Russia will inform Beijing and Tehran as they consider the risks and benefits of escalating tensions in Taiwan and the Middle East.