Russia Announces a Slate of Military Exercises for 2022 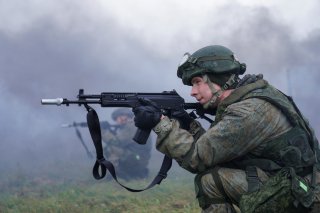 The militaries of Russia, India, Egypt, and Pakistan will hold a series of joint drills in southern Russia this fall, according to the press service of Russia’s Southern Military District.

"A joint cross-branch Russian-Indian exercise, INDRA 2022, is planned to be held on the territory of the Southern Military District. Units of ground forces of Russia and India will practice common training objectives at the Prudboi training ground in the Volgograd Region. The naval component of the exercise will take place in the Black Sea," the Southern Military District announced on Tuesday.

INDRA is a wide-ranging set of bilateral joint exercises between India and Russia that began in 2003. INDRA 2021 was held at the Prudboi Ranges in Volgograd to Russia’s southwest. Those drills were reportedly aimed at enhancing interoperability between the two militaries and involved a major counter-terrorism component, including hostage rescue simulations, intelligence sharing, and search missions. The press statement did not provide an agenda or elaborate on concrete timelines for INDRA 2022.

The Friendship exercises are a series of annual joint military drills between Russia and Pakistan that began in 2016. Prior editions of Friendship, which have been held on both Russian and Pakistani soil, were focused on counter-terrorist and anti-militant operations.

Last held in late 2019, Arrow of Friendship is a joint air defense exercise between Russia and Egypt. "On November 7, the battalions armed with the Buk-M2E and Tor-M2E surface-to-air missile systems destroyed an unmanned aerial vehicle approaching an airfield, while the crews of the all-terrain vehicle-mounted Igla-S man-portable air defense systems shot down a rotary-wing practice target and the Shilka-M4 self-propelled anti-aircraft gun systems engaged the simulated enemy’s manpower and light armor," read a Russian Defense Ministry press statement accompanying the exercise.

According to the Kremlin, the Russian military took part in nine international drills over the course of 2021. The Southern Military District’s announcement comes amid a Collective Security Treaty Organization (CSTO) peacekeeping mission in Kazakhstan carried out in response to protests and unrest. The intervention, requested by the Kazakh government last week, was the first military operation of its kind for the CSTO, a Russian-led military alliance composed of six post-Soviet states. Kazakh President Kassym-Jomart Tokayev announced on Tuesday that CSTO troops will start withdrawing from Kazakhstan in two days.