Russia, Be Afraid: Poland Might Get a Powerful New Anti-Tank Missile 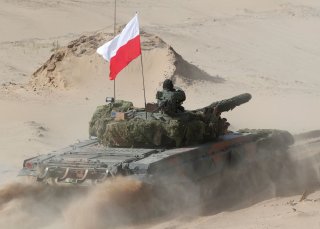 The NLOS is the longest-range variant in Rafael’s SPIKE missile family. According to company data, the NLOS has a standoff range of thirty-two kilometers, or nearly twenty miles, giving the missile a large coverage area. The NLOS’ guidance unit identifies targets visually, without laser guidance, tracking radar, or GPS. As a result, the missile is less likely to be detected and intercepted before reaching its target and is considered “stealthier.” The missile uses forward observers on the ground or UAVs in the air to relay optical target information to the missile, which can differentiate between high- and low-level targets while in flight.

If the SPIKE NLOS is accepted, the Israeli company would license missile production to Mesko, a Polish munitions manufacturer, and the NLOS would be manufactured in Poland—an attractive offer for Poland’s domestic defense industry.

Rafael’s design features a hull-mounted missile launcher that holds eight SPIKE NLOS missiles and may be mounted to Poland’s KTO Rosomak 8x8 vehicle, or alternatively to Poland’s Soviet-era BWP-1. Mating the NLOS system to the latter platform could potentially give an otherwise obsolete vehicle new abilities.

Importantly for both Poland and Rafael, the newer NLOS launcher is compatible with the thousands of SPIKE missile variants that Poland already has in service, including the SPIKE LR and SPIKE LR2, and would give Polish forces a greater amount of logistical flexibility. The NLOS is also slated to participate in Poland’s Kruk attack helicopter program, a competition that aims to replace the aged Mi-24 helicopter fleet still flown by the country.

If Rafael wins the tender, the deal could potentially be worth hundreds of millions of dollars, depending on how many NLOS units Poland buys and how widely the anti-tank missiles are distributed. Despite being manufactured by a non-NATO country, the SPIKE NLOS and other SPIKE variants are interoperable with NATO, another beneficial feature for the Alliance partner.

NATO recently completed Defender-Europe 20, which was the “largest deployment of U.S.-based forces to Europe in more than 25 years with 20,000 soldiers deployed directly from the U.S. to Europe,” according to official reports. Another exercise within the Defender-Europe framework, Allied Spirit, focused on interoperability at the tactical level and saw 6,000 Polish and American troops training together in Poland.

Both exercises come on the heels of President Trump’s threat to remove Germany-based American troops, though where exactly the troops would be moved to remains uncertain. Locations as far away as Guam and Hawaii have been suggested as part of America’s reorientation toward the Pacific, though moving formerly Germany-based troops to Poland isn’t out of the question.

An American presence in Poland is seen as essential to deterring Russian aggression in Eastern Europe. In 2019, Trump and Polish President Andrzej Duda reportedly agreed to move up to 1,000 American troops to Poland, and more American troops in Poland would not only be welcome—but necessary for preventing or resisting a Russian invasion. With or without the Americans, Polish capabilities appear poised to grow.