Russia Is Building Submarines to Deliver a 'Radioactive Tsunami' 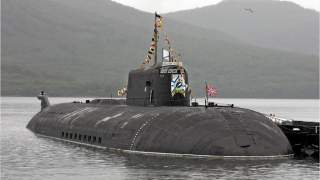 The first special-purpose nuclear submarine to carry Russia’s upcoming “Poseidon” thermonuclear torpedoes, Belgorod, will enter trials in June 2020 and is due to be commissioned several months later, while the Poseidon system itself is unlikely to enter service until the late 2020’s.

"The vessel has already begun trials,” Sevmash shipyard Director General Mikhail Budnichenko told Russian state news agency TASS earlier this week. "Besides, we have a schedule approved by the Defense Ministry, and the work is being carried out in strict compliance with this schedule… in line with the schedule, the acceptance act is to be signed in September of the same year.”

Belgorod was laid down earlier this year at the Sevmash plant in the northwestern province of Severodvinsk, with Russian President Vladimir Putin heading the ceremony from Saint Petersburg via teleconference. As previously suggested by The National Interest and now confirmed by TASS, the Belgorod is a specialized variant of the Oscar-II cruise missile submarine line whose interior layout has been redesigned to accommodate up to six Poseidon drones. Belgorod’s hardware and performance specifications remain unknown, as does the configuration of the six Poseidon drones. Given the Belgorod’s smaller-than-expected size, it is possible that a rotary launcher is being used to save space and facilitate an easier loading process.

The Belgorod will be joining the upcoming Project 09851 Khabarovsk as one of two submarines that have been purpose-built for the Poseidon system. Additionally, at least two commissioned Oscar-II submarines will reportedly be retrofitted to accommodate Poseidon.

Even as Poseidon’s two principal carriers move swiftly through the state trials process, little is known about the current development status of the weapon itself. The last official Poseidon update came in February of this year when the Russian Defense Ministry released a video entitled “field tests of the Poseidon complex”-- unfortunately, the footage revealed little to nothing about Poseidon’s characteristics.

Putin announced that same month that Poseidon is “successfully undergoing tests,” but the Kremlin has not offered a release timeframe. The most widely-cited delivery estimate comes from a March 2019 CNBC report, citing “people familiar with a U.S. intelligence assessment” who assert that Poseidon will enter service no sooner than 2027. A Russian defense industry insider gave a similar estimate to TASS: "The Poseidon system has been included in the State Armament Program until 2027 and is due to come operational within the Navy before the end of the program. It includes several high-speed deep-water torpedoes with a small nuclear powered unit.”

Poseidon is a nuclear-powered underwater drone armed with a 2-megaton atomic payload. Rather than striking its target directly, Poseidon’s bomb detonates underwater to trigger a radioactive tsunami that is capable of destroying coastal cities and other infrastructure several kilometers inland. While neither the fastest nor most effective means of delivering a nuclear payload, Poseidon offers several strategic benefits over more conventional ICBM’s. Whereas an air-launched missile is either stationary or flying toward its target, Poseidon can linger off an enemy’s coast for weeks in preparation for a coordinated strike. The Russian military establishment further believes that Poseidon travels too fast and too deep-- namely, 200 kilometers per hour hour at up to one kilometer underwater-- to be reliably intercepted by US coastal defenses.