Russia, China, and the Risks of War: My Conversation with General Milley 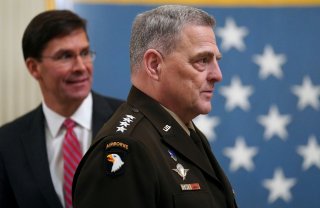 On December 2, Brookings hosted U.S. Army General Mark Milley, the twentieth chairman of the Joint Chiefs of Staff—the nation’s highest-ranking military officer. What he said about how to view America’s troubled relationships with Russia and China was important, and a useful corrective to those in and out of uniform who believed we are headed for violent confrontation someday with one or both of those unfriendly powers.

First, some context. Milley’s predecessor, Marine Gen. Joseph Dunford, told Congress during his 2015 confirmation hearings that Russia had become the top threat to American national security. A year after Russia seized Crimea, attacked eastern Ukraine with covert operatives, and prepared to disrupt America’s own elections, this assessment startled some, but it rang true. The post–Cold War honeymoon with Moscow was over, especially with Vladimir Putin again ensconced in the Kremlin—where he may now remain until 2035. For a quarter-century, since the Cold War had ended, American defense policy had focused on rogue states like Iraq under Saddam Hussein and North Korea. No more. Latter Obama administration defense policy under Secretary of Defense Ash Carter shifted to a “Third Offset” concept to strengthen conventional military deterrence of other great powers.

In the Trump administration, the National Security Strategy and National Defense Strategy focused on both Russia and China. By the end of his four-year tenure, Dunford was warning that China would soon be our top threat. Milley himself called China our “pacing threat” in his interview with me.

Most of these developments made sense. But now, we have a problem. Many in the Pentagon and beyond are now viewing Russia and China as not just competitors, but likely future enemies. Some are believers in the realist school of international relations that does not expect progress in interstate behavior over time and considers a conflict between great powers the norm. Others have watched the mischief made by Russia and China in Eastern Europe, the Middle East, the western Pacific—and here at home—and become understandably alarmed. The danger is that, taken together, we could develop a sort of national groupthink—perhaps not unlike that which contributed to the invasion of Iraq in 2003, or the Vietnam War. That could lead the United States to go beyond appropriate levels of vigilance and preparedness, and possibly overreact to a future crisis. Think of World War I, where conflict resulted from a small crisis that blew up because of mistrust and because militaries built war plans that expected—indeed, in some cases even required—rapid escalation once hostilities began.

It is here where Milley’s calm and sobering comments are pertinent. They did not reflect insouciance or casualness about the current state of affairs with Russia, China, and the West. But they projected a certain calm that would do us all well to remember. Milley expects the relationships to remain difficult and complex. But he does not expect war and does not consider war an acceptable outcome.

Specifically, when I asked him about the state of so-called great-power competition with Russia and China, this is what the Chairman said in reply:

So far so good. But then Milley really drove it home:

“In the first half of the last century, from 1914 to 1945 we had two world wars. And in between 1914 and 1945 150 million people were slaughtered in the conduct of war . . . Massive amounts of blood and destruction and we’re still obviously feeling the effects of World Wars I and II. And it’s unbelievable to think of great-power war. And now if you think of great-power war, with nuclear weapons it’s like, my God, you’ve got to make sure that doesn’t happen.”

It is so easy to forget this when imagining a “limited” conflict against China that starts over some uninhabited island in the Pacific, or a flare-up with Russia over some border town with one of the Baltic states like Estonia or Latvia. A certain element of the American military and strategic mind thinks we should be able to control such dust-ups before they escalate. History warns it ain’t necessarily so.

Of course, in keeping with the old adage that if you to keep the peace you must prepare for war, Milley then ticked off a number of important ways the United States must act to reduce the risks of conflict through deterrence: shore up American military capabilities, strengthen alliances, remain engaged around the world (but perhaps scaling back our military presence in some places, he said), keep the U.S. economy strong, project resolve.  None of that is easy; nothing about Milley’s comments could be construed as lackadaisical or overconfident in what it implied for policy.

But make no mistake, there is a peacenik streak to Milley’s thinking too. The United States, it must be noted (my words, not his), fights a lot of wars—in my more than thirty years in Washington, DC they include conflicts in Panama, Iraq, Somalia, Bosnia, Kosovo, Afghanistan, Iraq again, not to mention numerous smaller counterterrorism operations from Pakistan to Syria to Somalia to Libya and beyond.  Milley’s message is that planning for conflict against Russia or China is not like these other cases.  It is not just that they would be harder and more complex.  Rather, they are wars that must not be fought, where the measure of success is not military victory but deterrence and, if war does happen, rapid de-escalation and conflict termination.

As the Biden administration settles into power and thinks about its own national security and defense strategies, this counsel of Milley should be studied and heeded.

Michael O’Hanlon is the Senior Fellow and Director of Research of the Foreign Policy Program at The Brookings Institution. He specializes in U.S. defense strategy, the use of military force, and American national security policy.