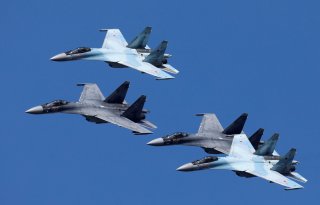 Even as the Russian Aerospace has conducted multiple “patrol flights” near Alaska and the Bering Sea in recent weeks, as well as drone exercises and other military drills, Moscow has apparently taken notice of foreign aircraft near its airspace. According to state media, there have been more than thirty foreign planes that conducted aerial reconnaissance near the Russian border in just the past week. That was based on infographics published by the Russian Defense Ministry’s newspaper Krasnaya Zvezda.

“Thirty-three spy planes of foreign states conducted air reconnaissance along the borders of the Russian Federation and were tracked by Russia’s radars,” the infographics reported.

In addition to the aircraft, the ministry said that five drones also flew close to the Russian borders.

Russian fighter jets from the air defense quick reaction alert forces were scrambled twice to intercept the foreign aircraft, but there were apparently no violations of the Russian state border. In total, in just the past week Russian pilots performed 249 flight shifts from 89 airfields as part of their combat training.

Among the recent Russian intercepts, last Friday Su-30, Su-35 and MiG-31 fighter jets from the Russian Eastern Military District were scrambled to intercept U.S. Air Force B-52H bombers, which had conducted a patrol over the Sea of Okhotsk.

The ministry said that the American bombers were continuously tracked by Russian monitoring capabilities as well as from aircraft.

“The Russian aircraft performed the flights in strict compliance with the international rules of using the airspace over the neutral waters, without violating the borders of other states,” the Defense Ministry’s National Defense Control Center told Tass.

“These strategic bomber missions provide our Airmen with the realistic long-duration sorties that they require to remain highly proficient and ready to act when called upon to support the collective defense of the United States,” said Lt. Col. Christopher Duff, the 96th Bomb Squadron commander from Barksdale. “Deploying in an expeditionary format challenges our aircrews, maintainers and support personnel in different theaters, further demonstrating the credibility of our forces to be agile and provide long-range global strike capability, anywhere in the world, and at any time.”

The United States has been stepping up its long-range bomber flights–partially as a show of force against Chinese saber-rattling in the western Pacific, but also as a response to Russia’s patrols near Alaska. Four Tu-95MS strategic bombers, which are a key element of the air component of Russia’s nuclear triad, performed a planned flight over the neutral waters of the Chukchi, Bering Sea, Sea of Okhotsk and the northern part of the Pacific Ocean.