Russia Claims Its Kornet Missile Can Kill Any Tank 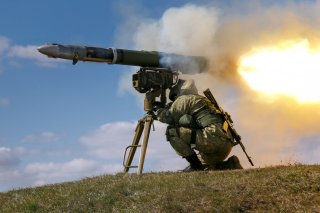 The 9M133 Kornet (NATO reporting name: AT-14 Spriggan) first entered service with the Russian Army in 1998. The modern man-portable anti-tank guided missile (ATGM) is intended to counter main battle tanks (MBT). And if Russian officials are to be believed, it is capable of taking out just about any armored land-based vehicle in the world including those fitted with explosive reactive armor (ERA). It can also be employed against fortifications, combat assets, and maintenance facilities.

The third-generation ATGM was developed to replace the Fagot and Konkurs missile systems. However, it has never fully replaced previous systems, due to its high cost.

This week, Dmitry Litovkin, editor-in-chief of the Russian-based Independent Military Review, further highlighted how the ATGM is also capable of piercing any smart active protection system of armor with a paired launch of missiles.

"It was pointed out that the Kornet self-propelled anti-tank missile systems can fire in tandem mode, specifically, two missiles can be launched at a time within a single command and control field to pierce the enemy armor's active protection system," Litovkin told TASS on Wednesday. "Both missiles thus launched follow each other in a single laser beam with a short interval, which helps deceive the armor's smart protection systems, such as the Israeli Iron Fist developed by IMI."

Smart protection systems such as the IMI work by firing a cluster of striking elements towards an incoming missile detected by its radar sensors. This can successfully destroy the attacking weapon, yet, this protection may fail against the Kornet when a second missile is launched.

The platform can overcome other attempts to protect an armored vehicle including the deployment of aerosols and smoke.

"However, this does not significantly reduce the efficiency of the smart Kornet missile," Litovkin added. "Even if a smoke screen emerges all of a sudden while a missile approaches a target, the missile does not lose control and continues moving along the original flight path. Considering the missile's velocity, the target will most likely have no time to change its position and will be wiped out, in spite of the smoke."

The other advantages offered by the Kornet missile are that it can attack a target by both a paired launch and tandem-charge warheads, which can strike explosive-reactive armor and pierce various add-on armor plates and are increasingly used to protect against such munitions.

The Kornet ATGM is typically operated by a crew of two and can be fired from its traditional tripod assembly, while it can be fitted to a variety of tracked and wheeled vehicles as well. The missile is directed by a laser beam, and the system has a range of up to eight kilometers. An export version, the Kornet-E, was employed by the Iraqi Army against U.S. and coalition forces during Operation Iraqi Freedom in 2003, where it was credited with the destruction/disabling of several U.S. Army vehicles including an M1 Abrams MBT.