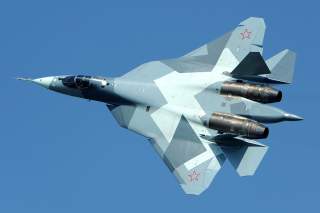 Russia reportedly has upgraded the stealth features on its radar-evading Su-57 fighter.

But the enhancements don't amount to much. Even with upgrades, the Su-57 still is a niche, mostly experimental aircraft that lacks critical combat systems and which Russia has not committed to building in large numbers.

Be skeptical of that claim.

For one, the technology Rostec described isn't new. Many fighters all over the world feature radar-reflecting canopy treatments. Usually made of indium-tin-oxide, the gold-color treatment reflects radar as a single smooth object, thus preventing objects underneath the canopy -- crew and ejection seats, for example -- from bouncing back even greater radar returns.

The indium-tin-oxide treatment perhaps is most apparent on the American-made F-16 fighter. Lockheed Martin began applying the coating to F-16 canopies back in the 1980s under the Have Glass program. Goldish canopies also are apparent on U.S.-made F-22 and F-35 stealth fighters.

And while the the new canopy might reduce the radar signature of the Su-57's cockpit by a third, it might barely make a dent in the type's overall signature.

That's because the engine inlet, not the cockpit, is the biggest signature problem along a plane's frontal aspect. "Most of the RCS contribution for the nose region will result from the engine inlet," John Kelly, a Boeing engineer, wrote in a 1975 study.

Even if Rostec's insinuation were true and a 30-year-old canopy treatment truly did meaningfully reduce the Su-57's radar signature, it hardly would matter to Russia's overall military power.

With or without its indium-tin-oxide canopy-treatment, the Su-57 is too expensive for Russia to buy in meaningful numbers. The Russia air force acquired just 10 of the stealth fighters in the eight years following the type's first flight in 2010.

The U.S. military spent more than $60 billion acquiring around 180 F-22s and expects to spend $400 billion buying some 2,300 F-35s. The Kremlin's entire annual budget in recent years has totaled around $60 billion, down from  a modern peak of $70 billion in 2016. The United States annually spends around 10 times as much.

The Kremlin's budget has allowed it to buy around 100 new aircraft per year, roughly a third as many new planes as the Pentagon buys. And while the Americans can afford to buy nearly a hundred stealth fighters every year, the Russians barely can afford any.

Moscow has admitted that just two-thirds of its roughly 3,600 military aircraft are "modern."

With military budgets flattening amid an economic slump, Moscow decided to not acquire the Su-57 in large numbers. The Russian air force ordered its first dozen production-standard stealth fighters in August 2018, hoping to form the first regular squadron some time in 2019.

But those 12 Su-57s could be all that the air force gets for the foreseeable future. The Kremlin implied it would keep the design in reserve so that it could restart production in the event of a major conflict.

"You know that today the Su-57 is considered to be one of the best aircraft produced in the world," Yuri Borisov, Russia’s deputy defense minister, told a T.V. audience. "Consequently, it does not make sense to speed up work on mass-producing the fifth-generation aircraft."

Meanwhile, a deal for Russia and India to co-develop a variant of the Su-57 has fallen through. A rumor that Vietnam might want to acquire the Russian stealth fighter likewise has amounted to nothing.

Maybe an indium-tin-oxide canopy makes the Su-57 slightly stealthier. That barely matters when Russia might operate just one squadron of the planes.