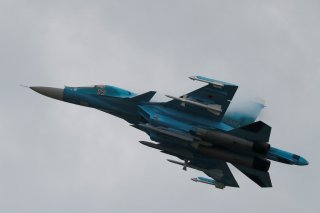 "In accomplishing their tasks, the crews of Su-34 fighter-bombers delivered about 20 bombing strikes against the notional aerodrome infrastructural facilities of the hypothetical enemy and conducted over 30 launches of S-13 air-to-surface rockets," the CMD announced in a press statement issued on Tuesday. According to the statement, Su-34 pilots breached the notional enemy’s "multilayered" air defenses while utilizing the Khibiny electronic countermeasures  system to avoid detection. The Su-34’s worked in tandem to deliver bomb and missile strikes from multiple directions, the statement added. The drills were held near the Kurgan region in the Urals and involved twelve aircraft, including Su-34’s and Su-24MR reconnaissance planes. The exercises also included twenty pieces of unspecified ground equipment and "150 flight, ground and flight control personnel," according to the CMD.

The Su-34, NATO reporting name "Fullback," began with  Soviet efforts to develop a new platform in the 1980s combining advanced ground-attack capabilities with a high degree of maneuverability. The Fullback was formally introduced into service in 2014 as an all-weather, two-seat, supersonic Generation 4+ strike fighter. Armed with a diverse complement of air-to-air, anti-ship, and air-to-ground missiles—as well as a wide range of guided bombs—spread across twelve hardpoints, the Su-34 distinguished itself as a potent strike platform over the course of Russia’s intervention into the Syrian Civil War.

The following day, the CMD announced sweeping combat drills in the central Kemerovo region involving as many as 1,000 artillery and motorized infantry troops. "During the exercise that will last two days, the troops will practice conducting a march, deploying a field command and control system, ensuring interoperability of various formations and carrying out defensive operations. Overall, the drills involve about 1,000 personnel of motor rifle and artillery units and also about 60 items of military hardware," the CMD said.

The CMD’s spate of drills comes at a time of heightened international attention on Russia’s military movements, with Western military experts and intelligence sources warning that the ongoing buildup of troops along Russia’s side of the Russian-Ukrainian border suggests the Kremlin is considering plans to invade Ukraine.  "It does appear that over the course of the year, the Russian military has been told to prepare for a large-scale military contingency with Ukraine—to position itself such that it could execute this type of contingency," said Michael Kofman, director of the Russia Studies Program at the Center for Naval Analysis and a fellow at the Kennan Institute in Washington, DC, during a Center for the National Interest event in November. Kremlin officials say that Moscow has no plans to attack Ukraine and insist that Russia has the right to station, move, and deploy troops within its borders as it sees fit.