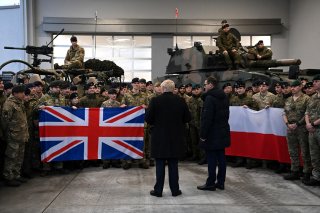 Tens of thousands of Russian troops are currently involved in exercises in Belarus, but Moscow has been quick to defend the deployment. The Russian military forces, which arrived in Belarus to take part in the joint Russian-Belarusian Allied Resolve 2022 exercises, are scheduled to return home after the completion of the follow-up Union Resolve 2022 exercise, which is scheduled to end on February 20.

The back-to-back exercises reportedly involve 30,000 Russian troops deployed to five training ranges and four airfields across Belarus. That has alarmed some in NATO, as Belarus borders both Ukraine and Poland.

However, Moscow has maintained that the troops will return to Russia at the completion of the joint exercises. Russian foreign minister Sergey Lavrov also took aim at NATO for similar deployments in Eastern Europe.

“Unlike the drills on its territory, which Russia performs, and after which the troops return to garrisons, the troops that are far from the territory of both the UK, the U.S., [and] Canada, are sent to Baltic states, to Black Sea states, those troops and arms usually never get back home,” Lavrov said after talks with British Foreign Secretary Liz Truss on Thursday.

“We also spoke about it today, but the minister pretty much clearly explained that it is no business of ours, whereas Russian troops on the Russian territory are London's main concern, while the de-escalation logo is the uniting factor for the whole western community," Lavrov added.

It is true that U.S. forces have been sent to Poland and Romania in recent weeks, but it comes as Russian forces have continued to mass on the Ukrainian border.

Presence in the Baltic States

NATO forces are also deployed to the Baltic states of Estonia, Latvia, and Lithuania. All three former Soviet states have been NATO members since 2004. The Baltic nations maintain small militaries of their own, which is why last month the Baltic states called for increased military deployments on their soil to deter Russia.

“Of course, we are discussing with our allies to increase their presence here to act as a deterrent,” Estonian premier Kaja Kallas told Reuters in an interview. “If you look at the map, the Baltic states are a NATO peninsula and therefore we have our worries.”

Deterrence and the defense of NATO allies are part of the alliance's key tenets.

Russia's buildup along its borders with Ukraine is also driving the deployment of NATO forces. Moscow has denied any aggressive intent and said it is entitled to station troops where it wants within its borders. However, Russian leaders have disliked the NATO deployments that have occurred has a result of those deployments.