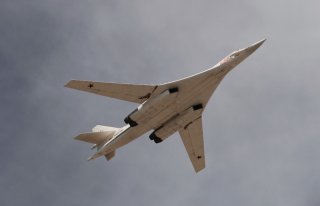 "On January 12, the first newly-built Tu-160M strategic missile-carrying bomber performed its debut flight from the aerodrome of the Kazan Aviation Enterprise, a subsidiary of the Tupolev Company [part of Rostec’s United Aircraft Corporation]," Rostec’s press office announced. Rostec noted that the bomber flew at an altitude of 600 meters, with the flight lasting thirty  minutes. The press statement added that the Tu-160M crews performed maneuvers intended to test the bomber’s “stable and controlled operations in the air.”

The Tu-160M modernization project was relaunched in the mid-2010s as a stopgap measure to sustain Russia’s long-range strategic aviation forces until the projected arrival of the next-generation PAK DA heavy stealth bomber sometime in the late 2020s or early 2030s. The new plane largely retains the airframe design of the original Soviet-era Tu-160 “White Swan,” but introduces a raft of improvements under the hood. "The new aircraft has 80% of its systems and equipment modernized," said United Aircraft Corporation) CEO Yury Slyusar. The Tu-160M revision is slated to receive an upgraded NK-32-02 engine, which promises gains in efficiency and reliability. The new aircraft will likewise boast a revamped avionics package to ensure a greater degree of interoperability with Russia’s latest fighters. It is not immediately clear if the Tu-160M will receive new defensive or countermeasures systems to offset the survivability disadvantages of the original White Swan’s unstealthy airframe design. Russian defense sources reported that the Tu-160M upgrade program will eventually incorporate a digital glass cockpit, but it is unclear how soon that feature will make it into serial production.

Boasting a combined weapons payload of at least 45,000 kg, the Tu-160M will retain its predecessor’s role as a heavy stand-off missile platform. The new bomber will be able to carry Russia’s latest and most potent air-launched weapons, Rostec’s press release quoted Russian Industry and Trade Minister Denis Manturov as saying. "Today we see considerable prospects for the Tu-160 platform: its further development will make it possible to use it for new, breakthrough weapons," Manturov said.

Prior Russian reporting suggested that the Tu-160 upgrade program will be spread across two production cycles, the Tu-160M and a purported “Tu-160M2” variant, but there is still no official confirmation that these are two distinct models and not simply different names for the same aircraft. All of the sixteen Tu-160 bombers currently serving in Russia’s long-range aviation forces are slated to be upgraded to the Tu-160M standard.