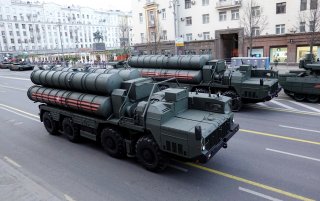 “As part of the practice stage with a live-fire exercise, the teams of S-400 ‘Triumf’ systems and Pantsyr-S1 anti-aircraft missile/gun launchers repelled a notional enemy’s simulated massive missile and air strike by launching missiles,” the Central Military District’s press office told Tass on Tuesday. “As a result, all the targets designated for their destruction were struck in accordance with the required procedures.”

According to reports, Strizh-M, Favorit and Kaban aerial missile targets and Armavir low-altitude target missiles were used to create a combat training environment and simulate an air attack.

“During the drills, the units of anti-aircraft missile regiments also went on combat duty for air defense in a new positioning area, made a march to temporary on-duty positions after overcoming notionally contaminated terrain sections and carried out a set of measures for camouflaging combat hardware,” the press office added.

In June it was announced that the Russian military would receive an additional three regiments of the S-400 anti-aircraft missile systems, along with four sets of the S-350 “Vityaz” battlefield air defense launchers by 2023 under new contracts with the Almaz-Antey defense manufacturer.

India is among the latest countries to sign a deal with Moscow to acquire the platform. Last month, New Delhi agreed to a $5 billion deal to buy five units of the air defense missile system, and this follows Saudi Arabia’s agreement to purchase the system earlier this year.

Earlier this year Russia and Turkey also entered an advanced stage of talks for the delivery of the second regiment set of the S-400 systems to Ankara. Moreover, Russia was apparently ready to discuss the possibility of technological cooperation with Turkey, which could imply the participation of Turkish companies. However, in July, Moscow abruptly suspended further S-400 delivers to the People’s Republic of China (PRC), so why Russia has looked for foreign buyers of the platform potential customers may include those in Beijing.