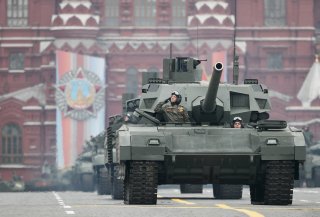 Does the Russian military have a personnel shortage? Is it an issue of trust, or does Russia simply desire to keep its soldiers out of harm’s way in a future conflict? Perhaps Russian Federation president Vladimir Putin doesn’t believe there is any danger from autonomous weapons, because this week there is news that the Russian military is exploring remote-controlled operations for its Su-57 fifth-generation multi-role fighter jet, but now comes news that an unmanned version of the Armata T-14 Main Battle Tank is also in the works.

“The appearance of heavy unmanned combat vehicles is a matter of the near future,” the T-14’s manufacturer UralVagonZavod announced this week during the ongoing Army-2020 forum outside of Moscow as reported by DefenseWorld. “Within the framework of R&D commissioned by the Ministry of Defense, the company’s specialists are working to create robotic combat vehicles of the front edge. During the work, the T-14 Armata tank was also tested in unmanned mode," the company announced during the ongoing Army-2020 forum in Moscow.”

This isn’t a new development for the tank, however. Among the T-14’s innovative characteristics is its unmanned turret, which includes a remotely controlled 125-millimeter 2A82-1M smoothbore main gun with fully automated loading. The driver, gunner and tank commander are housed in a crew compartment that is located in an armored capsule at the front portion of the hull, isolated from the automatic loader as well as the ammunition storage in the center of the tank.

UralVagonZavod’s Deputy General Director Vyacheslav Khalitov has previously said that the company had carried out theoretical and experimental work to create a robotic tank on the Armata-heavy military tracked vehicle platform.

The forty-eight-ton modern T-14 tank is widely reported to be able to reach speeds of ninety-kilometers per hour, which makes it potentially more mobile than the American-built M1 Abrams.

The Russian fifth-generation MBT is based on the Armata Universal Combat Platform (UCP), and according to Russian state-media is also the first tank in the world to incorporate so-called “network-centric warfare” technologies. In normal speak this means that the T-14 can be conduct reconnaissance missions, operate as a target designation and fire adjustment vehicle for self-propelled guns, surface-to-air missile systems and even T-90 tanks.

One issue with any remote control vehicle is ensuring that distant operators are provided with “situational awareness” but in this case, the T-14 may have that covered. It features wide-angle cameras fitted around the exterior. These provide a 360-degree all-round vision and situational awareness for the crew, with the commander’s sight, mounted on the top of the turret, also offering an entire field of view while the gunner’s sight is fitted with a direct-vision periscope and laser designator. The cameras can be zoomed as necessary, while heat sensing and infrared viewing capabilities are available under all weather conditions, day or night.

If it is true that an unmanned version is in fact in the works, then it is possible it is an attempt to help entice foreign customers. Last month, the head of Russia’s Federal Service for Military and Technical Cooperation, Dmitry Shugayev, told the Serbian Glas javnosti newspaper that Russia has started promoting the latest T-14 tanks for export. An unmanned version would be a far better selling point than Russia having to admit that one of the advanced Armata tanks was destroyed in Syria earlier this year!