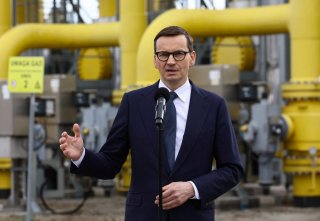 Polish and Bulgarian officials confirmed on Tuesday that Russia had halted natural gas deliveries to the two countries after they had refused to pay for the shipments in rubles—a demand the Russian government made to shore up its currency’s value in the aftermath of crippling international sanctions.

The deliveries, which had been made by Russian gas giant Gazprom, are scheduled to end on Wednesday. It is not yet clear where the two countries will replace the imports, or what the consequences will be if they fail to do so. While Poland has largely found alternatives to Russian energy, around 90 percent of Bulgaria’s natural gas consumption comes from Russia via the “TurkStream” natural gas pipeline underneath the Black Sea.

Although most European countries have condemned Russia’s invasion of Ukraine and have cooperated with American and European sanctions against the Kremlin, many have continued to import natural gas from Russia to power electrical grids and heat houses. Historically, these imports have been paid for in U.S. dollars and euros—currencies to which Russia’s access has been sharply reduced by international sanctions.

Consequently, in April, Russia began to insist that hydrocarbon sales to “unfriendly” countries—those participating in the international sanctions regime—be paid for in rubles. Insisting on payments in rubles forces importers to purchase rubles with dollars and euros, artificially increasing demand for Russia’s currency and increasing its value on international exchange markets. This, and similar steps, have largely returned the ruble to its prewar level after it briefly lost nearly half of its value following the imposition of sanctions.

European nations have largely refused to make ruble payments, arguing that forcing them to do so constitutes a breach of contract. The Bulgarian government argued on Tuesday that Moscow’s proposal for a two-step payment procedure, in which Bulgaria would pay for the gas before receiving it, was “in violation with the current contract”—adding that it “bears considerable risks for Bulgaria,” inviting the possibility that Bulgarian authorities could make a payment without receiving a gas delivery in return.

Bulgarian officials indicated that they were working with domestic Bulgarian gas companies to find alternative sources of natural gas. They also claimed that no restrictions would be imposed on consumption, despite anticipated shortages.

Poland, which has vocally supported Ukraine in its war with Russia and has supplied Kyiv with heavy weapons, announced on Tuesday that its deliveries would also stop on Wednesday. However, Polish climate minister Anna Moskwa added that the country had worked for years to decrease its reliance on Russian energy, and was in no danger of shortages from Gazprom’s cutoff.