Russia Expected to Move Swiftly With Annexation of Ukrainian Territories 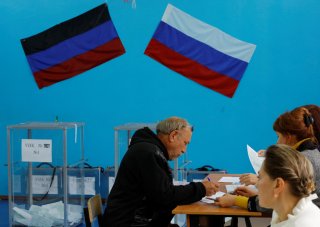 Moscow is expected to annex swathes of eastern and southern Ukraine following five days of referendums in Russian-occupied areas.

The vote tally came back as expected in the Kremlin’s favor with an overwhelming vote in all four occupied regions to join the Russian Federation. In the pro-Russian breakaway Luhansk and Donetsk People’s Republics (LPR and DPR), 98 percent and 99 percent, respectively, voted for unification with Russia, according to data provided by local authorities. The southern Kherson and Zaporizhzhia regions voted 85 percent and 93 percent, respectively, in favor of unification. The voting data provided by local election officials have not been independently corroborated.

Kyiv and Western governments have rejected the referendums as a “sham,” claiming that they were carried out through coercive and illegal voting practices. “Forcing people in these territories to fill out some papers at the barrel of a gun is yet another Russian crime in the course of its aggression against Ukraine,” Ukraine’s Foreign Ministry said in a statement.

The Kremlin said last week it will honor the results of the referendums. Russian president Vladimir Putin is expected to formally recognize the referendums within days, setting into motion a process that could lead to Russia absorbing around 15 percent of Ukraine. The move would oblige Moscow to defend the annexed regions as its own territory, setting the stage for a new round of escalation as Ukrainian president Volodymyr Zelenskyy vowed to forge ahead with counteroffensives to retake all territories captured by Russia.

Medvedev, who adopted an outwardly hawkish stance after Russia’s invasion of Ukraine, claimed last week that the Kremlin can use strategic nuclear weapons in response to threats against any of the Ukrainian territories it annexes. “Russia has announced that not only mobilization capabilities, but also any Russian weapons, including strategic nuclear weapons and weapons based on new principles, could be used for such protection,” Medvedev said.

Putin signed a “partial mobilization” decree in the days leading up to the referendums that will see as many as 300,000 qualified Russian reservists with military experience deployed to Ukraine. The Russian-aligned LPR and DPR servicemen who in many instances have borne the brunt of the fighting in eastern and southeastern Ukraine would become part of the Russian Armed Forces proper if the Kremlin moves to formalize the referendum results.

Sergey Aksyonov, the head of Russia-annexed Crimea, suggested that the referendum decision will be accompanied by a rebranding of the Russian war effort in Ukraine from a “special military operation” to a “counterterrorism operation on our own territory,” describing the move as a “point of no return.” The Kremlin has yet to confirm this reported shift in nomenclature: “I don’t know about that. In any case, this decision can only be made by the supreme commander-in-chief and president of the country [Vladimir Putin],” said Kremlin spokesman Dmitry Peskov when asked about the change.