Russia Is Flexing Its Military Muscle to Test Its International Prowess 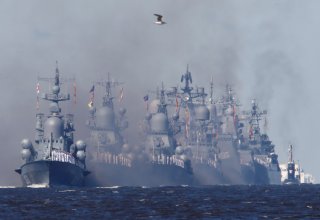 Russian warships held a new round of combat drills in the Sea of Japan amid mounting military tensions in the Pacific region.

“The air targets were timely uncovered and locked on. After the cruise missiles entered the destruction range, they were successfully eliminated by missiles of the Redut air defense systems fired from the corvettes," the statement continued. The Pacific Fleet added that an unspecified unmanned aerial vehicle supported the corvettes during the exercises. It is not immediately clear from Russian media reporting on the exercise whether or not the missile launches were part of a broader set of regional drills involving other Russian Naval assets.

The Redut, or Poliment-Redut, is the Naval version of Russia’s modernized S-350E Vityaz medium-range surface-to-air missile (SAM) system, equipped with 9M96E guided missiles. The Redut system is compatible with the Russian Navy’s latest classes of modernized corvettes and frigates.

The two vessels that led the exercises, Sovershenniy and Gromky, are part of Russia’s Steregushchiy class of modern corvettes. The Russian navy planned to commission eleven Steregushchiy-class corvettes through 2024. Of these, six are already serving in the Baltic and Pacific fleets; five more have been laid down and are in various stages of construction or sea trials.

The introduction of the Steregushchiy-class marked one of the Russian navy’s first steps in its ongoing transition away from its bloated, aging Soviet inheritance to a smaller, but manageable and more advanced local force. Despite their relative youth, the Steregushchiy boats have already been succeeded by the larger and heavier Gremyashchiy-class of guided missile corvettes. An iterative update, the Gremyashchiy-class boasts greater endurance and adds the ability to launch cruise missiles that include Russia’s new 3M22 Tsirkon winged, hypersonic anti-ship missile.

Earlier this year, the Pacific Fleet carried out what appears to be its largest set of military exercises in the Sea of Japan since 2019. Months before, Russian and Chinese strategic bombers flew a joint patrol mission over the Japan and East China Seas.