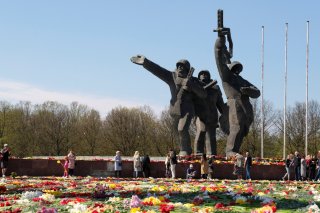 The Latvian government demolished a Cold War-era monument celebrating the Soviet Union’s victory over Nazi Germany in the Second World War on Thursday—leading to celebrations by many Latvians who viewed the statue as an enduring reminder of Soviet repression. However, the demolition of the statue led to angry denunciations from Russia and the country’s ethnic Russian minority.

On Thursday morning, two diggers equipped with pneumatic hammers destroyed the monument, a 260-foot concrete obelisk with red stars at the top, to the applause of onlookers. In advance of the pillar’s destruction, Latvian authorities had removed several bronze statues surrounding the monument as part of the memorial complex.

The statue was destroyed after Latvian lawmakers approved a bill ordering the removal of all statues and monuments celebrating “totalitarian” regimes. Although the bill did not explicitly denounce Soviet monuments, it clearly referred to the Soviet Union which governed Latvia from 1940 to 1941 and again from 1944 to 1991.

Following the dissolution of the Soviet Union, hundreds of Soviet monuments were left behind in Latvia—including the obelisk. The status of the monuments quickly became a political flashpoint in the newly independent country with the ethnic Latvian majority largely supporting their removal and both Russia and the Russian minority supporting their preservation. In 1994, Russia and Latvia signed a treaty in which Riga promised to protect the monuments. In spite of popular opposition—including an amateur attempt to destroy the monument with dynamite in 1997, leading to two deaths—Latvia largely adhered to its commitments under the treaty for the following three decades. However, following Russia’s invasion of Ukraine in February, the Saeima, Latvia’s parliament, voted overwhelmingly to rescind the treaty. Two days after the Saeima’s approval, Riga’s city council approved the monument’s destruction.

The obelisk was constructed in 1985 to celebrate the Red Army’s recapture of Riga from Nazi Germany in 1944. However, many Latvians have viewed the city’s “liberation” in different terms, regarding it as the beginning of the Soviet Union’s half-century totalitarian rule. “This monument was a steady reminder of our occupation and the associated fate of many people: deportation, repression, and so on,” Latvian president Egils Levits said during a live stream of the demolition. “We do not need this kind of monument.”

Mayor of Riga Martin Stakis added that the monument’s destruction marked a “historic moment for Riga and all of Latvia.”

The destruction of the obelisk took place roughly one week after neighboring Estonia removed a similar monument in Narva, a city in the country’s east with a significant Russian population. Following the Estonian monument’s removal, the Russian Killnet hacker group launched a wave of cyberattacks against Estonian state institutions, although the government later described them as “ineffective.”