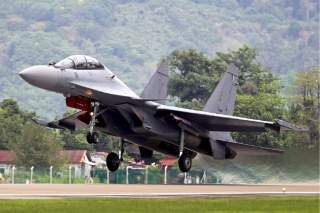 Russia hopes to order 36 upgraded versions of the two-seat Sukhoi Su-30SM Flanker-H multirole fighter that would replace the jet’s existing Salyut AL-31FP with the Saturn AL-41F-1S found onboard the Sukhoi Su-35S Flanker-E according to a new report. The new engine would not only afford the Flanker-H with roughly an additional 4,200lbs thrust per engine—or about 8,400lbs thrust total—it would also increase the Su-30SM’s electrical power-generation capability, opening up the potential for future avionics upgrades such as a new radar.

The aerospace industry trade journal Aviation International News, citing Yuri Slyusar, head of Russia’s United Aircraft Corporation, reported that the Russian defense ministry will order 36 more improved Su-30SM fighters. According to the report, the Russian defense ministry will place a firm order for the plane later this year. The report, written by reporter Vladimir Karnozov, states that the money to develop the improved Su-30SMs was already included in the 2017 budget. Indeed, United Engine Corporation’s Ufa Machinery-Building Production Organization (UMPO) division is already working on adapting the AL-41F1S to the Su-30SM.

The addition of the AL-41F1S, which can produce roughly 31,900lbs of thrust, would significantly boost the Su-30SM’s thrust-to-weight ratio, which should improve the Flanker-H’s overall kinematic performance by some margin. But while the additional thrust would boost the fighter’s raw aerodynamic performance, the AL-41F1S also incorporates more powerful generators, according to Karnozov.

That means that the Su-30SM would have additional electrical power available for future avionics upgrades such as a new or upgraded radar with much greater power. Indeed, Karnozov speculates that the Su-30SM’s Bars-R passive electronically scanned array (PESA) could be upgraded to match the power output levels of the Su-35’s Irbris radar, which has a peak output of 20kW. However, the additional reserve electrical power could also help the jet to one day accommodate a future Russian active electronically scanned array (AESA) radar, which would further boost the capability of the Su-30SM.

The Russians are likely to retrofit the upgraded engines to its entire existing fleet of Su-30SMs since it would boost commonality across more of the Kremlin’s fighter fleet. Versions of the AL-41 are already flying onboard the Su-35 and the developmental Su-57 PAK-FA, though in the later case, the current engine will eventually be replaced with a much more powerful izdeliye 30 powerplant that is currently in development. Indeed, earlier this year, Russian deputy defense minister Yury Borisov told the state-owned TASS news agency that Moscow’s would upgrade its Su-30SM fleet this year, with deliveries of the modernized jets starting in 2019.

"We plan to kick off modernization this year, complete its first stage in 2019 and then start [deliveries of] upgraded vehicles," Borisov said. “They performed in the best possible way in Syria and proved all their capabilities. This aircraft is to be upgraded in terms of import substitution and adaptation of new air weapons."

The addition of the new engines appears to be part of a plan to facilitate a potential second stage of modifications to the Su-30SM fleet. The first stage appears to be a relatively modest upgrade while the second stage modernization would be a far more extensive modernization effort. The second stage upgrade for the Flanker-H could potentially be developed in conjunction with the Indians, who fly the Su-30MKI from which the Su-30SM was derived. The Russians have pitched New Delhi a modernized Super-30 upgrade for their Su-30MKI fleet, but it is unclear if India will go forward with the project in its current form. However, both Russia and India will have to eventually upgrade their Su-30 fleets to meet future threats. As Borisov noted, Moscow and New Delhi could be operating this particular Flanker variant for more than 40 years.