Russia Has Made Some Dangerous Changes to Its Zircon Hypersonic Missile 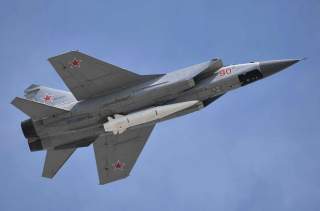 Key point: Russia has upgraded their missile to allow it to be used from land instead of just by sea.

The 3M22 Zircon (Tsirkon) missile is one of the most hyped-up weapons in the Russian arsenal. One of the big three publicly-revealed hypersonic missiles, the Zircon is an anti-ship missile designed to pose an “unstoppable” threat to ships within a 300-400 km range.

But anonymous sources suggested to CNBC in a December 2018 interview that the Zircon was being adapted to be a land attack missile as well as an anti-ship missile. What could a land attack Zircon look like? What payloads could it carry, and which targets in Europe could be at risk?

On the surface, the ground-attack Zircon is a very formidable weapon. It’s not interceptable by any known means, it has plasma stealth to avoid detection, and it would be able to strike at very quick notice. But its original role as an anti-ship missile perhaps hampers its usefulness. Deploying them would be rather straightforward, as K-300 Bastion anti-ship launchers are said to be able to be modified to fire the Zircon.

According to Russian sources, the Zircon is derived from the supersonic P-800 Oniks, though the drawings of the Zircon looks significantly different from the P-800. The dimensions of the missiles are comparable, with the Zircon estimated to be between 8-10 meters long and the P-800 being 8.6 meters long in the surface-launched variant.

Given that the missiles are approximately similar in dimensions, it’s possible to estimate the warhead size of the Zircon based on the P-800. The P-800’s “battle compartment” which houses the warhead is located in the nose of the missile and is relatively small, due to the constraints of the air-intake and ramjet engine. Although the Zircon missile moves the air intake to the bottom of the missile, the nose is also far more slanted and sharp than the P-800, so the “battle compartment” is likely of the same size or smaller.

Based on this, we can estimate the payload of the ground-attack Zircon. The P-800 has a payload of either a 200kg high explosive or 250kg semi-armor-piercing warhead. It’s probably safe to assume the Zircon has a warhead of 200 kilograms or less given the shape of the missile and comparative weights.

The seeker and guidance package of the Zircon is also practically unknown. While it likely it uses radar homing of some variety, the accuracy of the missile is unknown. Land attack missiles tend to use a variety of imaging technologies and satellite navigation technologies that may have trouble working at hypersonic speeds, so the ground-attack Zircon may not be very accurate.

Finally, while the 300-400 range km range might be considered sufficient for anti-ship duty, it leaves a lot to be desired from the ground-attack role. Ground-attack Zircons stationed in Kaliningrad can reach most targets in Poland, but not further. With the Intermediate-Range Nuclear Forces Treaty off the table, ground-attack Zircons might find themselves significantly outranged by other missile systems.

While ground-attack Zircons are not weapons to be scoffed at, their questionable accuracy and limited payload and range means they are not as worrisome as the stated capabilities of the other big hypersonic weapons, Kinzhal and Avangard.