Russia Has a Massive Amount of Tactical Nuclear Weapons. Why? 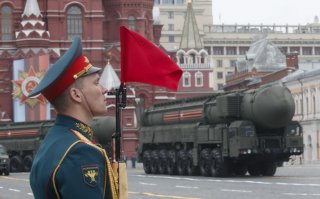 The United States and Russia still actively deploy 230 and 2,000 tactical nuclear weapons respectively—arsenals which are not regulated by treaty, unlike strategic nuclear weapons. But calling them “tactical” and “non-strategic” weapons is arguably a misnomer.

As former Defense Secretary James Mattis once told Congress, “I don’t think there is any such thing as a tactical nuclear weapon. Any nuclear weapon used any time is a strategic game-changer.”

The term “tactical” implies shorter-range, less destructive, and more “useable” weapons intended for striking battlefield targets and forward bases in sparsely or unpopulated areas, not wiping out cities, factories and power plants across the globe.

But U.S. and Russian arms control treaties simply define non-strategic weapons as those with a strike range inferior to 3,417 miles. Of course, regional rivals like China, India, and Pakistan consider their non-intercontinental range nuclear weapons to be strategic anyway.

The U.S. non-strategic arsenal is made up of roughly 230 B61 nuclear gravity bombs droppable by jet fighters. 100 to 150 B61s are forward-deployed for use by NATO allies to form a kind of collective-responsibility pact.

Where the hawks are more on point is that Russia has developed more precise, longer-range dual-capable missiles which can be used to deliver either a conventional or nuclear warhead, creating dangerous ambiguity.

In the early years of the Cold War, the Soviet and U.S. militaries thought nuclear weapons would be liberally employed in future wars—and not just for civilization-shattering strategic attacks.

A tank column barreling through your lines? Drop a nuke on it with an artillery piece, fighter bomber, or even a portable “nuclear bazooka.”

Enemy warships pummeling your submarine with depth charges? Respond with the “special weapon” in the torpedo tubes.

Many of these applications were essentially ways to work around the limited precision of early guided weapons. NATO, in particular, saw tactical nukes as a last-ditch hedge against the land warfare behemoth that was the Warsaw Pact.

But in the post-Soviet era, Russia isn’t favored to win a prolonged conflict against NATO. So now Moscow sees non-strategic nukes as a more useable hedge against U.S. military power.

But would Moscow actually use nukes?

Moscow’s official policy states it will use nuclear weapons to retaliate against an adversary’s use of a weapon of mass destruction, or to preemptively strike against an imminent nuclear attack identified by Russian intelligence.

However, the policy states Moscow may also use nukes in response to non-nuclear attacks threatening to disarm Russia’s nuclear forces, or that threaten the existence of the Russian state itself.

Unfortunately, these latter conditions could be interpreted broadly. In practice, Russian officials have not hesitated to threaten nuclear weapons use injudiciously.

“…officials explicitly threatened to use nuclear weapons against ballistic missile defense facilities, and in regional scenarios that do not threaten Russia’s survival or involve attacks with weapons of mass destruction. Moreover, the fact that Russian military planners are pursuing a broad range of upgraded and new versions of nuclear weapons suggests that the real doctrine goes beyond basic deterrence and toward regional war-fighting strategies, or even weapons aimed at causing terror.”

One theory is that Russia may make limited nuclear attacks a part of an “escalate to deescalate” strategy in which Russia quickly seizes a disputed territory, then employs a nuclear weapon to shake the resolve of NATO countries assembling forces for a counterattack, bringing an end to hostilities.

However, some critics argue this analysis exaggerates or mischaracterizes the prominence of “escalate to deescalate” in Russian strategic thinking. Instead, nukes may be a way of maintaining “escalation dominance” in the face of superior NATO airpower rather than instrumental to coercive offensive strategy.

“…while the Russian military leadership may believe that a nuclear war cannot be won, it does not believe that limited nuclear use will necessarily result in uncontrolled escalation. Russian thinking in this area is based on deterrence by intimidation, or fear inducement, and deterrence through limited use of force…A modernized nuclear arsenal, with lower yields and precise means of delivery, is better able realize such missions, whether it is select use for the purpose of escalation management or nuclear warfighting in geography proximate to Russia’s own borders.”

However, he cautions that calls for the United States to match Russia’s arsenal capability for capability make little sense because Russia’s non-strategic nukes are premised on U.S. conventional military superiority.

Let’s conclude by surveying Russia’s estimated non-strategic nuclear forces based on a report by the Bulletin of Atomic Scientists.

Nearly half of Russia’s non-strategic arsenal (930 warheads) are estimated to belong to the Russian Navy. Of greatest relevance are long-range (1,550 miles) subsonic Kalibr land-attack cruise missiles, as well as P-800 Oniks supersonic anti-ship missiles (range 500 miles), both understood to be nuclear-capable.

Both the P-800 and Kalibr can be mounted on Russian frigates, corvettes, and Yasen-class submarines. The P-800 is also deployed on truck-mounted Bastion-P coastal defense systems, which are believed to have twenty-five nuclear warheads allocated.

The Russian Navy also reportedly still maintains nuclear torpedoes, depth charges, and anti-submarine rockets. Like dropping hand grenades in a fishing pond, these weapons allow the destruction or disabling of submerged vessels in a given sector without having to nail down their exact position.

Missile defense is often described as similar to shooting down a rifle bullet with another bullet. Nuclear warheads again offer a cheap solution to the precision problem: instead of having to accurately impact an incoming warhead, an air defense nuke can lean on its considerable blast radius.

The Russian Army is estimated to possess only seventy nuclear warheads for its missile batteries. Its precise Iskander-M tactical ballistic missile system can swap its regular warhead for up to a 50-kiloton nuke.

Additionally, four battalions of the Iskander-K variant instead launch a variant of the nuclear-capable Kalibur missile called the 9M729 Novator, the development of which ushered in the demise of the INF Treaty regulating intermediate-range missiles.

Russia has also developed a unique air-launched Kinzhal hypersonic ballistic missile with a 1,200-mile range. This is currently deployed by ultra-fast MiG-31K interceptors, and can also be carried by the Tu-22M3M bombers. In the future, Moscow is expected to employ Su-57 stealth fighters in a nuclear strike role too.

Russia will likely continue to improve the speed, stealth, and precision of its non-strategic nuclear arsenal in the 2020s. Future arms control negotiators might, therefore, seek to finally address ostensibly “non-strategic” nuclear weapons. However, Moscow may only be open to contraints to non-strategic nukes if exchanged for restrictions to U.S. space-based capabilities and an end to the NATO nuclear sharing policy.