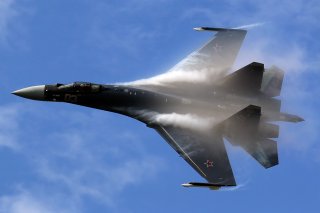 The Russian Aerospace Force (Air Force) will soon receive deliveries of an advanced but more importantly domestically-produced helmet-mounted target acquisition and display system for its MiG aircraft beginning next year. This is a major step as the previous versions of the helmets were produced in neighboring Ukraine, a situation that almost seems ironic given the recent history between the two nations.

However, even as relations between the Ukraine and Russia remain tenuous there is no denying that the countries’ shared history has only made things very complicated when it comes to military hardware. The military-industrial complexes have been integrated—a relic of the Soviet Union, as Moscow planners deliberately located key manufacturing in various Soviet republics to increase national unity.

As a result, some advanced equipment crucial to Russia has been produced in Ukraine, but since 2014 when the cooperation between the two countries in the military-technical sphere was suspended, Moscow has been seeking to domestically produce what it was previously importing.

The Electroautomatics Experimental Design Bureau started the process of developing a domestic version of the helmet-mounted target acquisition and display systems for aircraft of the Russian Aerospace Force's tactical aviation back in 2016 to replace Ukrainian versions.

“As for the planes developed by the Mikoyan firm [MiG aircraft], the devices that we demonstrated from the viewpoint of substituting the imported Ukrainian systems with our versions on Sukhoi planes, which was done, precisely the same work is underway for replacing the items on the aircraft developed by the Mikoyan firm,” Electroautomatics First Deputy CEO Anatoly Shukalov told Russian state media on Tuesday.

“In principle, next year [we will begin the deliveries to the troops] and nothing impedes this process,” Shukalov added. “The system itself is autonomous and has undergone trials. Only the mathematical software has to be finalized for interaction with the aircraft’s systems.”

The domestically produced helmet-mounted displays will replace the imported Ukrainian Sura version. The target acquisition and display system is currently used on the Su-27SM3, Su-30SM and Su-35S aircraft.

While reports haven’t stated its costs, it is likely far less than the advanced helmet used in the Lockheed Martin F-35 Joint Strike Fighter, which cost upwards of $400,000 each!

The F-35’s advanced helmet-mounted display was developed as a joint venture between Collins Aerospace in Cedar Rapids, Iowa, and by Elbit Systems of America in Fort Worth, Texas. It serves as the pilot's primary display system replacing the traditional heads-up display (HUD). Lockheed Martin described the helmet in detail: “The F-35’s Helmet Mounted Display Systems provide pilots with unprecedented situational awareness. All the information pilots need to complete their missions—airspeed, heading, altitude, targeting information and warnings—is projected on the helmet’s visor, rather than on a traditional Heads-up Display.”

A Ukrainian Defence Industry pamphlet offers similar praise of its SURA helmet system: “The SURA helmet-mounted target designation system is intended for quick aiming of guided weapon and viewing systems at visual targets by pilot’s head turn without aircraft course change. The upgraded version of the SURA HMTDS—the SURA-I is intended for aiming and flight information displaying in the pilot’s field-of-view. The new and serial helmet-mounted units are identical by form, weight and dimensions, attaching-mechanical and electrical parameters.”

The Russian Electroautomatics Experimental Design Bureau hasn’t provided any details on the capabilities of its domestically-produced helmeted-mounted target acquisition and display but it is likely the features would be similar to the SURA HMTDS.