Russia Has a Problem With Its Veterans 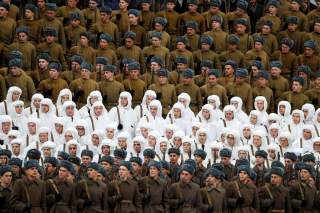 Isolated, unemployed and unable to adjust.

“People who, from a young age, have devoted themselves to hard military service, as a rule, find it difficult to adapt to new conditions,” wrote Kalinichev in Russian news publication Independent Military Review. “Social and psychological adaptation becomes a difficult process for them: it is necessary to master new social roles, form a new identity that will allow us to adequately perceive ourselves, our environment, and find a new profession. Moreover, difficulties await the former military at every turn. It is difficult for them to navigate the world of civil professions and sources of information, to relate their capabilities to the requirements of various types of labor, to look for vacant positions and conclude labor contracts.”

This isn’t the first time that Russian had had a veterans problem. After World War II, millions of Red Army solders returned home to face a devastated economy and Stalinist repression (prisoners who survived Nazi captivity were sentenced to the gulag on suspicion of treason). Soviet veterans of the Afghan War returned home expecting victory parades, only to find their sacrifices forgotten.

Image: Participants march during a military parade to mark the anniversary of a historical parade in 1941, when Soviet soldiers marched towards the front lines during World War Two, on Red Square in central Moscow, Russia November 7, 2019. REUTERS/Evgenia Novozhenina.