Russia Is on the Highway to a Hypersonic Showdown 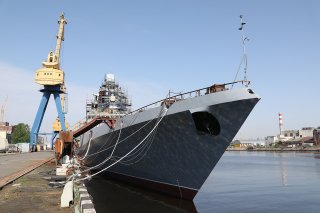 Russia’s new Tsirkon hypersonic cruise missile has recently completed another round of testing, bringing the weapon a step closer to service readiness.

A defense industry insider source told TASS state news that the missile was repeatedly launched from a surface ship and coastal installation. “The flight tests of Tsirkon, with launches from a coastal mount and . . . Project 22350 Admiral Gorshkov frigate have been successfully completed. Over ten launches were performed, the latest of them in July,” said the source.

Tsirkon has undergone a flurry of launch tests from aboard an Admiral Gorshkov-class frigate since January 2020, with recent reports indicating that the Russian Navy has decided to fast-track the remainder of the missile’s trials. The Navy appears to be shifting its focus to test-launching the missile from submarines, as Tsirkon inches closer to attaining initial operating capability status on the heels of a rocky development cycle colored by recurring delays and major technical setbacks.

The 3M22 Tsirkon (also known as “Zircon”) is a winged, anti-ship hypersonic cruise missile that is reportedly capable of reaching speeds of up to Mach 9 or eleven thousand kilometers per hour. The missile’s precise operational range remains unclear. Recent reports suggested a range of roughly 1,500 kilometers against ground targets and 1,000–1500 kilometers against naval targets, but earlier industry insider sources alleged that the missile can strike targets as far away as 2,000 kilometers under ideal battlefield circumstances. Tsirkon’s sheer speed and unpredictable flight path make the weapon exceedingly difficult—if not potentially impossible—to track and reliably intercept, with Russian experts suggesting that the missile can credibly threaten U.S. carrier strike groups and impede the Navy’s carrier air wing from operating safely. Tsirkon was among a slew of new tactical and strategic weapons, including the hypersonic Avangard hypersonic glide vehicle and Kh-47M2 Kinzhal air-launched ballistic missile, which were unveiled by Russian president Vladimir Putin during his 2018 state-of-the-nation address.

Tsirkon’s upcoming delivery to Russia’s Navy was made official last month during the ARMY-2021 defense exhibition, with the Defense Ministry announcing a contract for the first serial Tsirkon batch. It was recently reported, but never officially confirmed, that the Admiral Gorshkov-class frigate Admiral Golovko will become the first active-duty vessel to field the Tsirkon missile. Admiral Golovko was laid down in 2012 and is expected to be handed over the Northern Fleet by the end of 2022, pending the vessel’s completion of state trials. The Tsirkon missile is slated for widespread adoption across Russia’s latest and most capable surface ships, including the Admiral Nakhimov and Petr Velikiy Kirov-class battlecruisers, as well as select corvettes from the modernized  Gremyashchiy-, Buyan-, and Karakurt- classes. Tsirkon is likewise expected to figure prominently into the strike capabilities of the new Yasen-M class of nuclear-powered cruise missile submarines.

TASS’ source added that the next wave of Tsirkon tests is planned for November and will continue throughout the following year. The missile is projected to enter service after 2022, with the manufacturer specifying that the government’s initial Tsirkon contract will be fulfilled by 2025.