Russia to Hold Firing Tests of Its Combat Robot 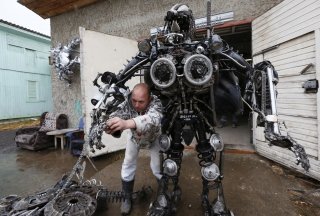 Maybe it isn’t the “Terminator” but the Russian military’s latest combat robot will be put through the tests later this month to determine whether it even has any Terminator-like capabilities. The Advanced Research Fund and Defense Ministry of Russia will hold trials of the Marker combat robot during the International Military-Technical Forum “Army-2020” arms fair.

“Under the Marker project, a series of running and firing tests are planned in August,” Advanced Research Fund CEO Andrei Grigoryev told Tass last week. “The trials will be conducted jointly with units of Russia’s Defense Ministry.”

The Marker robotic platform was developed as part of a joint project of the Advanced Research Fund's National Center for the Development of Technologies and Basic Robotics Elements and the Android Technology research and production association— the developer of the Fedor humanoid robot (Final Experimental Demonstration Object Research). The new combat robot, which is also being positioned as a building kit for creating models for future warfare platforms, is expected to lay the basis for testing interoperability of ground robots, unmanned aerial vehicles and Special Operations Forces.

While it is among the new hardware being demonstrated at the Army-2020 event, the final testing of the Marker report will likely take place next year. Russian state media had previously reported that the project would be handed over to the Russian Ministry of Defense for that final testing.

To date, the shooting tests of the Marker robotic combat platform have shown that it can strike targets quicker and more accurately than professional shooters, while the combat robot is also capable of distinguishing between civilians and military personnel. It has been “trained” to determine the difference between unarmed targets and those that pose an active threat and to only fire at the latter.

In selective-fire tests, the robot was able to fire from a sporting rifle but also used a Kalashnikov machine gun to hit flying targets including flying discs, but it has successfully been used against striking small drones.

“We do not want the robot to destroy everything in front of it, leaving a dead zone behind it,” Oleg Martyanov, who heads the Russian Foundation for Advanced Research Projects’ National Center for the Development of Technologies and Basic Elements of Robotics, told Tass in June. “That is why it must be able to clearly define threats using new technologies and promptly react to them.”

While it is unclear how the Marker combat robot will be demonstrated later this month, it will be just one of the new weapons platforms that will be spotlighted at the annual arms fair, which may have a smaller number of attendees that recent previous years due to the novel coronavirus pandemic. However, the Russian Federation has confirmed that the event will take place as scheduled.

This year’s Army-2020, which will be held at the Patriot Congress and Exhibition Center of the Russian Armed Forces in Kubinka outside of Moscow from August 23–29, will feature demonstrations of 730 items of armament and military hardware state media reported.

The Russian military has been developing a number of unmanned combat platforms, including the Uran-9, which was deployed to Syria with mixed results; and earlier this year deployed the Orlan-10 drones in drills in Siberia and Tajikistan. China has been working on its own “killer robots.”

Maybe the Terminator is closer than we realize.