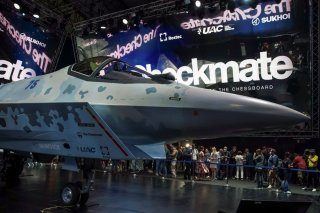 The fifth-generation Checkmate fighter will be featured at the upcoming Dubai Airshow, according to top Russian officials.

“As part of the Dubai Airshow, the schedule includes flights by Russia’s MC-21-310 (running Russian-made PD-14 engines), the medical version of the Ansat helicopter and combat helicopters Mi-28NE and Ka-52E, while the static exhibition of the Russian equipment will be represented by a prototype of the light tactical aircraft Checkmate and helicopters Ka-226T and Mi-171A2,”  Russia’s industry and trade minister Denis Manturov told reporters. Manturov added that Russia’s new Orion reconnaissance will likewise make an appearance, as well as the Sukhoi Superjet-100 airliner and several more items from the country’s commercial catalogue.

The United Arab Emirates (UAE) was one of four countries—with the others being India, Vietnam, and Argentina—identified in Checkmate’s early promotional materials as a prospective customer for the new fighter. Officials later added, without elaborating on any current or prospective negotiations, that the Checkmate is also being marketed toward African countries.

The upcoming Dubai Airshow will provide Rostec with perhaps its best opportunity yet to showcase the Checkmate fighter to the UAE and other Middle Eastern importers. As of early September, Russian officials said Moscow had not received any procurement requests for the new fighter. According to Deputy Prime Minister Yuri Borisov, Russia’s Defense Ministry is considering placing the first Checkmate order itself. “This is a major export potential factor. Foreign customers are always keen to know if the country’s national armed forces use the military technologies that are on offer for export,” Borisov added.

The Sukhoi Su-75 “Checkmate” is a single-engine, single-seat fifth-generation multirole stealth fighter. The fighter, unveiled during the 2021 edition of the biennial Russian MAKS Airshow, was developed from Sukhoi’s Light Tactical Aircraft (LTS) program.

The Checkmate is intended as an export product. At a purported flyaway cost of roughly $30 million, the fighter is aggressively positioned to compete for contracts with the likes of the  Dassault Rafale and JAS-39 Gripen. The plane is likely powered by the new Izdeliye 30 engine and sports a glass cockpit layout reminiscent of the Russian Su-57 fifth-generation fighter. The aircraft supports short takeoff and landing capability and comes with the “Matryoshka” logistic support system for streamlined and cost-effective maintenance cycles. Checkmate boasts RVV-MD and RVV-SD medium- and short-range air-to-air missiles, Grom air-to-surface missiles, rockets, and a slew of guided as well as unguided bombs. This expansive arsenal allows the fighter to be configured for a gamut of air-to-air and strike missions with a total payload capacity of over seven tons. According to Sukhoi, unmanned and two-seat Checkmate variants are in the works.