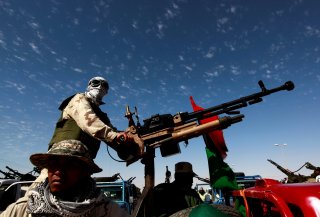 Here's What You Need To Remember: The Russian army isn’t well prepared for this sort of threat

Across Africa and Central Asia, insurgents and warlords have found that a Toyota pickup can become a formidable weapon when armed with a machine gun, cannon or rocket launcher. They’re fast and nimble to swarm a bigger opponent like a tank, and far, far cheaper to buy and maintain than an armored vehicle.

Fearing attacks by technicals in Central Asia, Russia is deploying a weapon to stop them: armed trucks.

“Russian military bases in Central Asia will be strengthened by ‘trucks with guns,’” according to Russian newspaper Izvestia. “Special vehicles on the chassis of the Ural and KamAZ vehicles received additional protection against bullets and fragments. On board, the military will be able to place an impressive arsenal - machine guns, automatic grenade launchers and even anti-tank missile systems.”

Izvestia pointed to the widespread use of technicals by ISIS in Iraq, in which swarms of armed pickups surprised and routed Iraqi government troops who were well-armed with American-made M1 tanks and other heavy weapons.

But the Russian army isn’t well prepared for this sort of threat, either. “The problem of equipping our army with armored trucks has long been relevant,” a Russian military expert told Izvestia. “Unfortunately, we had a certain bias - either completely unprotected vehicles or heavier armored personnel carriers.”

The protection of armored personnel carriers isn’t much stronger than that of an armored truck, the expert said. “At the same time, they are much heavier and more expensive. And in terms of firepower, trucks even surpass light armored vehicles - in their body you can install several machine guns, an automatic grenade launcher, an anti-aircraft gun or an anti-tank missile system.”

Gun trucks enjoy other advantages over armored vehicles. “They are much faster if it in rough terrain or impassable dirt,” Izvestia pointed out. “In the steppes and deserts of Central Asia, wheeled vehicles can most of the year drive off-road. Another strength of automobiles is that they are cheaper to manufacture and operate and have almost double the power reserve.”

The subtext to buying gun trucks is fear that Russia’s backyard in Central Asia is about to become a lot more dangerous. “The need to cover the Central Asian direction is becoming especially urgent against the backdrop of the U.S. decision to withdraw troops from Afghanistan,” Izvestia noted.

These won’t be the first Russian gun trucks. During the Afghan War, Soviet troops tried to repel mujahideen ambushes by mounting twin-barreled 23-millimeter anti-aircraft guns on truck beds. Though the cannon’s high rate of fire and ability to elevate to hit high-angle targets were welcome, the unarmored gun trucks proved dangerous for the gun crews.

Gun trucks also have a history with the U.S. Army. During the Vietnam War, convoys of supply trucks faced constant ambushes by the Viet Cong. Tired of being hit, resourceful GIs in logistics units devised their own convoy escorts.

Gordon Rottman, a Vietnam veteran who wrote a book about gun trucks in that war, pointed to multiple lessons from that conflict. For example, the most useful ammunition for gun trucks was armor piercing/incendiary (AP/I) rounds fired by larger-caliber weapons.” he told the National Interest. “7.62mm and smaller caliber weapons were marginal, but useful at short ranges for close-in attacks. AP/I will be necessary to defeat enemy technicals, even if they are lightly armored or no armor at all.”

Gun trucks also need to carry spare parts, extra tires and qualified mechanics for convoy escort. “Reinforced suspension systems and trucks of sufficiently heavy duty for off-road use are needed,” Rottman said. “The U.S. found 2-1/2-ton trucks battered themselves to death because the extra armor, guns, ammo, and other equipment proved to be too much weight. They went to 5-ton gun trucks.”

Michael Peck is a contributing writer for the National Interest. He can be found on Twitter, Facebook. or on his website. This article first appeared last month.