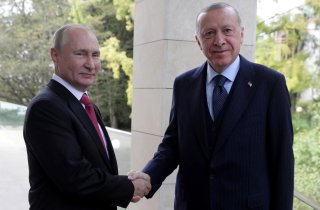 Russian leader Vladimir Putin confirmed over the weekend that he would travel to Tehran on Tuesday for consultations with Turkish president Recep Tayyip Erdogan and Iranian president Ebrahim Raisi regarding the three countries’ policies on ongoing events—with a primary focus on the Syrian Civil War, but likely including discussions on Russia’s continuing invasion of Ukraine, according to AFP.

Russia, Turkey, and Iran have emerged as significant power-brokers in Syria since the start of its civil war in 2011. While Turkey has historically backed Islamist rebels opposed to Syrian leader Bashar al-Assad’s government, both Russia and Iran strongly supported Assad throughout the war. Russia’s intervention on the Syrian leader’s behalf in late 2015 is thought to have turned the tide of the war in his favor. The three nations also participated in the “Astana peace process,” a regional initiative launched in Astana (now Nur-Sultan), Kazakhstan, intended to promote Syrian peace efforts.

The news of the summit on Tuesday comes as Erdogan has threatened to launch another military intervention into northern Syria to combat Kurdish militant groups there—a step that Syrian, Russian, and Iranian leaders have voiced objections to, with Raisi claiming that it would “destabilize the region” and Putin recommending that the Turkish leader “refrain” from raising tensions along the Turkish-Syrian border.

Western leaders have also opposed the proposed intervention, with U.S. State Department officials warning that attacking Kurdish forces in northern Syria could inadvertently empower the still-active remnants of the “Islamic State” (ISIS) terror group there. During the most active phase of the Syrian Civil War, the United States supported the Kurdish “People’s Protection Units” (YPG) against ISIS. However, Ankara views the YPG as a covert branch of the “Kurdistan Workers’ Party,” an anti-Turkish rebel group that Turkey and several Western countries consider a terrorist organization.

Tuesday’s meeting is also slated to be the first in-person meeting between Putin and Erdogan since the onset of the Russian invasion of Ukraine. Although Turkey has opposed the invasion and aided Kyiv—notably through the sale of Bayraktar drones to Ukraine’s armed forces—it has also sought to position itself as a neutral mediator in the conflict, hosting negotiations between Russian and Ukrainian diplomats regarding peace efforts and a potential pathway to open Ukrainian grain exports through the Black Sea.