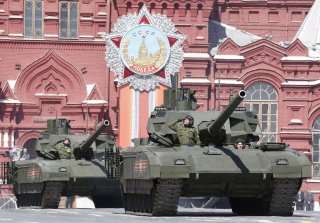 The International Military-Technical Forum-- better known as “ARMY”-- is Russia’s flagship annual defense exposition. With over half a million visitors 1,200 exhibitors, and 65 foreign delegations, ARMY 2019 is among the most ambitious shows of its kind.

The exposition is, in no small part, a live catalog of Russia’s upcoming export products. With Rosoboronexport-- Russia’s official arms export agency-- riding a wave of surging profits, it falls on this year’s lineup to help continue that trend. Here are some of the highlights.

Infantry fighting vehicles (IFV) predominated in the armor department. Defense manufacturer Uralvagonzavod (UVZ) debuted a new variant of its much-anticipated T-15 heavy IFV, with a slightly altered Kinzhal 57 turret. The new turret is markedly shorter and mounted slightly higher than the one shown at Army 2018, suggesting changes to its feed and rotation mechanisms. Jane’s 360 notes that the displayed T-15 is otherwise externally identical to last year’s show floor model, with the same two 9M120 Ataka missiles and grenade launchers.

Also present, albeit apparently unchanged from last year, were the lighter VPK-7829 Bumerang and Kurganets-25 IFV’s. All three IFV’s are based on the Armata Universal Combat Platform, a set of design and engineering principles intended as a foundation for the next generation of Russian armoured vehicles.

The most highly-anticipated product in the Armata family is the T-14, also featured at ARMY 2019. UVZ went in depth as to the T-14 specifications, revealing new details confirming previous speculation. The current prototype model measures at 10.8 meters in length, 3.9m in width, and 3.3m height, coming it at a heftier-than-expected 55 tons. These specifications are unlikely to change significantly, or at all, this late into the T-14’s development cycle. There were no major alterations to the T-14’s weapons suite, consisting of a 2A82-1M smoothbore gun, 57mm cannon, Kornet anti-tank missiles, 7.62mm machine gun.

The other mainstay of Russia’s ARMY 2019 showing was a glut of modern artillery and air defense systems. KBP Instrument Design Bureau unveiled the Pantsir-S1M short-range air defense system, which boasts the same fire control and radar technologies as the Pantsir-ME naval variant displayed earlier this year at IDEX-2019. The S1M succeeds Russia’s aging Pantsir-S1, which has recently distinguished itself for an unflattering performance record in the ongoing Syrian conflict. Also displayed was the medium-range S-350 “Vityaz” system. Vityaz completed state trials in April of this year; boasting the same 9M96 guided missiles that were meant for the S-400 and many of the latter’s modernized electronics, it is on track to become Russia’s flagship medium-range air defense system.

The artillery category was prominently occupied by UVZ’s 2S41 “Drok” 82 mm self-propelled mortar, which entered testing earlier this year and is slowly inching closer toward serial production. Drok is being developed on a Taifun K-4386 chassis, and will come with an 82mm mortar capable of firing 12 rounds per minute at a maximum range of 6,000m.

ARMY 2019’s armour lineup is yet another confirmation that Russia’s land forces are going all-in on the Armata Universal Combat Platform as a consistent modernization standard across multiple armor categories, including main battle tanks (MBT’s), IFV’s, and artillery units. However, Russia’s defense establishment has displayed considerably less enthusiasm in marketing Arma products for export purposes. This likely has to do with the considerable production costs of the Armata platform, a problem that could potentially be overcome with the development of less expensive export variants down the line.