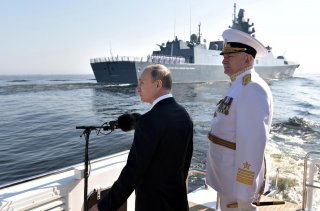 This week the Russian shipyards will hold a single day of laying down new ships and submarines, state media reported—highlighting efforts to modernize the Russian Navy’s fleet.

The Severnaya Shipyard press office declined to comment on the source’s information.

The upgraded Project 22350 frigates will both be constructed at the Severnaya Shipyard in St. Petersburg—and is part of the United Shipbuilding Corporation. State media also announced that the vessels will be tentatively named the Admiral Yumashev and Admiral Spiridonov—after two noted officers from the Soviet Union’s navy.

There are currently four frigates of the Project 22350 as well as the upgrade Project 22350 in various stages of construction at the Severnaya Shipyard. Among those is the Admiral Kasatonov, named for the Soviet officer who during his career commanded the Baltic Fleet, the Black Sea Fleet and the Northern Fleet before becoming deputy command-in-chief of the Soviet Navy. That vessel was laid down in late 2009 and launched in 2014 and is currently undergoing sea trials and is preparing to enter service with the Russian Navy.

In addition to the two new frigates, the Russian Navy laid down the two Project 885M “Yasen-M” multi-purpose nuclear-powered submarines at the Sevmash Shipyard in Severodvinsk, which is now also part of the United Shipbuilding Corporation. The contract for the construction of the submarines was signed at the Army 2019 international arms show last summer.

The Yasen-M line is a modernization package that is meant to account for the sixteen-year gap between the first commissioned Yasen vessel and the submarines currently under construction. The Yasen-M line is expected to occupy the same performance league as the Virginia-class of fast-attack submarines.

TASS also reported that multipurpose amphibious assault ships will be laid down at the Zaliv Shipyard in Kerch, and while the initial keel-laying ceremony was planned for June 29 it was postponed to a later date. The Project 23900 amphibious assault ships are expected to displace twenty-five thousand tons and will have a length of about 220 meters. The warships of this class will also be capable of carrying more than twenty heavy helicopters and will have the ability to transport up to nine hundred Russian marines.

This is a completely new type of vessel for Russia, as no warships of this class were built either for the Soviet Union or the Russian Federation. The first details of Project 23900 surfaced during a visit of Russian president Vladmir Putin to an exposition devoted to the future for the Russian Navy development this past January according to a report from Naval News earlier this year.

The Project 23900 would be shorter than the U.S. Navy’s America-class amphibious assault ships (LHA), which have a comparable displacement to the former Midway-class aircraft carriers, or even the Wasp-class LHA. The U.S. Navy’s warships can be configured as small carriers as these can be used with such aircraft as the AV-8B Harrier II and F-35B Lighting II.

The U.S. Navy’s USS Bonhomme Richard, which was damaged in a fire this week, is one of the U.S. Navy’s eight Wasp-class LHD vessels.