Russia Might Have Hard Time Conquering Poland In a War. Here's Why. 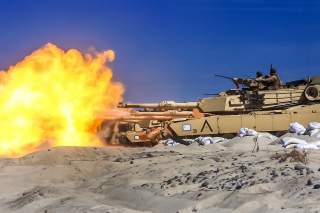 Key Point: Poland won't be a pushover in a fight.

The Law and Justice (PiS) party in Poland has been receiving a lot of international press for clashing with the EU. But one of the more interesting, but not as reported, aspects of their foreign policy is increased military spending and reformation of the Polish military. One of the centerpieces of the PiS defense policy is the creation of the new branch of the Polish military, the Territorial Defense Forces (Wojska Obrony Terytorialnej, WOT). The force is largely oriented as a counter to forms of hybrid warfare by Russia and draws upon the Ukrainian and Baltic structures and means of organization of such forces. However, the WOT has proven to be a lightning rod for controversy domestically, due to the apparent priority given to it for personnel and equipment.

The basis for the WOT was laid in December 2015, a few months after PiS won the majority of seats in the Sejm. PiS and the Polish right has framed Russia as being one of the primary national security threats to Poland, citing the Smolensk crash—in which most of the Polish military leadership died—as well as developments in Ukraine and the Baltics. Antoni Macierewicz, then PiS Minister of Defense (2015-2018) first proposed the idea of creating a force of volunteer light infantry at a regional level to supplement the national armed services. Macierewicz based his plan on preliminary documents for a similar formation created by Ministry of Defense under the last government. The team for implementation of the formation shifted after the 2015 parliamentary election. The plenipotentiary for the implementation of the WOT was Grzegorz Kwasniak, a former member of the Strategic Planning Bureau of the Polish General staff in the 2000s, and part of the team behind the 2007 Polish National Security Strategy document. In November 2016, the WOT was formalized into law as the fifth branch of the Polish Armed Forces, subordinate to the Minister of Defense but outside of the regular command hierarchy for the Polish army.

The roles for the WOT reflect its formation in recent years. In addition to the usual roles of protection of key infrastructure and supplemental security for military targets, the WOT is expected to help counter disinformation campaigns, counter cyber operations, support patriotic ideals, and help stabilize situations of crisis and martial law. They also are supposed to safeguard arrival zones for allied forces and carry out antisabotage operations for logistics. Macierewicz was even quoted as saying that they could counter Russia’s Spetsnaz (special forces). Unlike the regular Polish army, all training and garrisons for the WOT will be near the participant’s place of residence. WOT members will be able to keep certain equipment in their homes, but weapons will be stored in regional armories. Pay is given for going to exercises and training, with increased rates reserved for those in an active reserve state. This model is quite similar to the reserve forces in some Baltic nations. The size of the WOT will be considerable, with fifteen brigades (roughly one brigade per voivodeship). This leads to an estimated planned manpower of around fifty thousand men. Currently, there are only around seven thousand men in the WOT. The current goal is to reach the full manpower by 2019.

The need for the rapid growth of the WOT has lead to significant controversy in Poland. Various measures passed by Macierewicz have been seen as giving priority to the WOT over regular Polish military units. Notably, two hundred NCOs have been transferred from the regular force to the WOT. Psychological standards, as well as military studies, for officers are more lax than the regular army. This has drawn criticism from inside the Polish defense community. Some say Macierewicz is creating an undertrained and overpromoted officer corps. Others say that the transfer of NCOs removes the best men from operational forces and hurts the readiness and professionalism of the Polish army. Some have even implied that through these measures subordinate the General Staff of the Polish Army to the WOT. Some generals have resigned over the issue.

Macierewicz’s preference for the WOT extends beyond personnel. The WOT has also been given equipment priority, its units being some of the first to receive new MSBS rifles from FB Radom. Notably, WOT is getting preference for these rifles ahead of army special forces and operational units. The idea behind this move is that the WOT has fresher personnel and would have an easier time training on the MSBS, which has AR-style ergonomics. Regular personnel would be used to AK-style ergonomics from the Wz. 88 Tantal or Wz. 96 Beryl and might have a more difficult time adjusting to the new system. As for the rifle itself, the MSBS has superior ergonomics, recoil, attachment mounting options and shooting characteristics relative to the current army issue rifles. It also meets NATO standards better, feeding from STANAG pattern 5.56 magazines and having a standard Picatinny rail.

As a result of this controversy, some—including notable opposition politicians from the PO party—have called the WOT "the private army of Macierewicz." The PO attempted to subordinate the WOT to the Army General Command, but such moves were denied by PiS. PiS has also rejected overtures to require the armed forces to be apolitical like in the United States. PO politicians have expressed concern that the WOT’s mission to counter disinformation campaigns by hostile foreign powers could be used to counter political opposition.

The goals of the WOT are lofty: a regional motivated volunteer force that counters foreign subversion, provides assistance in time of crisis and fights back in event of an invasion. However, building such a force without sapping the readiness of the regular army is proving to be challenging. Only time will tell if the WOT can achieve its goals in conjunction with a professional Polish army.

Charlie Gao studied political and computer science at Grinnell College and is a frequent commentator on defense and national-security issues. He would like to thank Aleksander Lubicz for assistance researching this topic. This first appeared last year.