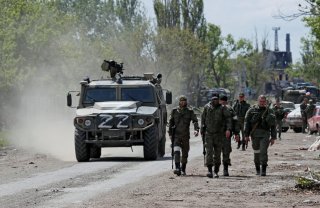 Top Russian officials have indicated that at least some of the Ukrainian servicemen belonging to the captured Azovstal garrison could eventually face trial in Russia.

The Office of the Prosecutor-General, a body responsible for overseeing prosecution in Russian courts, has asked the Russian Supreme Court to designate the ultranationalist Azov Battalion as a terrorist organization, potentially paving the way for the prosecution of the Azov members who surrendered to Russian forces earlier this week at the Azovstal factory in the southeastern port hub of Mariupol.

“The administrative case on recognizing the Ukrainian paramilitary nationalist association ‘Azov’ as a terrorist organization and a ban on its activities on the territory of the Russian Federation will be reviewed by the courts on May 26 in the building of the Supreme Court of the Russian Federation,” the Prosecutor General’s Office announced, according to Russian news outlet Izvestia.

The Azovstal garrison began surrendering to the Russian military on Tuesday; the surrender was staggered across several waves of evacuations to several towns in eastern Ukraine controlled by Russian-aligned separatists. Ukraine’s deputy prime minister, Iryna Vereshchuk, said Kyiv will exchange Russian prisoners of war for the Ukrainian servicemen, though it is not clear that Moscow has agreed to any such plan.

Anatoly Wasserman, a member of Russia’s lower parliament, introduced a bill that would make it illegal to exchange Azov fighters for Russian troops captured in Ukraine. “It is clear that an exchange would be declared by the collective west as a Ukrainian victory,” Wasserman said. The legislation is supported by Speaker of the State Duma Vyacheslav Volodin. “You are right to make the proposal, Nazi criminals should not be exchanged. These are war criminals, we must do everything to bring them to justice,” Volodin said, according to the Irish Times.

Russian politicians and political commentators have sharply distinguished between standard Ukrainian military personnel, who may be eligible for a potential prisoner swap deal, and Azov Battalion members. The latter have been repeatedly accused by top Kremlin officials, both during and prior to Russia’s invasion of Ukraine, of crimes against humanity. “It was these Azov battalion Nazis who had been exterminating the civilian population in the Donetsk and Lugansk republics, deliberately and with exceptional cruelty, for eight years,” said Russian Defense Ministry spokesman Maj. Gen. Igor Konashenkov.

Russian president Vladimir Putin previously ordered Russian forces in Mariupol not to storm the Azovstal facility, a decision that observers say was partly motivated by the perception that Russia could secure a substantial symbolic victory by capturing the factory’s defenders alive.