Russia Is a Nuclear Weapons Powerhouse for Lots of New Reasons 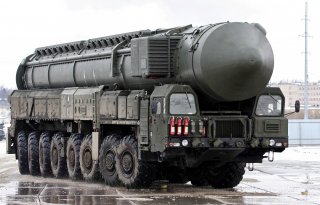 Russia has also been modernizing its nuclear forces and has been actively replacing Soviet-era systems with new missiles, submarines and aircraft while developing newer types of delivery systems including hypersonic missiles.

Even as the number of Russia's nuclear weapons has declined sharply since the end of the Cold War, Moscow still retains a stockpile of thousands of warheads – including more than 1,500 warheads that are deployed on missiles and bombers capable of reaching U.S. territory.

"The share of advanced weapons and hardware in the troops will make up almost 76% by 2024," Putin said in his annual State of the Nation Address to the Federal Assembly on Wednesday.

"This is a very good figure. In the nuclear triad, it will exceed 88% already this year," he added.

Wednesday's address followed Putin's February speech in which he proclaimed that the Russian Army and Russian Navy would be equipped with a variety of cutting-edge weapons systems, which will include lasers and hypersonic systems. He also suggested that Russian weapons would have no equivalents in the world.

"We will be doing our utmost so that our army and navy can become more and more advanced, which means strengthening capabilities of the strategic forces, channeling cutting-edge hardware to all types of forces, including laser, hypersonic systems and high-precision systems," noted Putin

"Along with this, as for promising models which are actually the weapons of the future, we have already gone from the stage of trials up to [the stage] of putting them on constant combat duty," Putin added. "Undoubtedly, courageous people loyal to the Fatherland, true patriots - soldiers and sergeants, and I will particularly emphasize, our officers, or the country's officer corps – have always been and still remain the fundamental and most solid basis of our Armed Forces."

He made the remarks during the State Kremlin Palace gala concert marking Defender of the Motherland Day. The Russian holiday occurs on February 23, began in 1922 as the anniversary of the Red Army's establishment, and until 1993 was called the Day of the Soviet Army and Navy.