Is Russia Planning a ‘False Flag’ Attack in Ukraine? 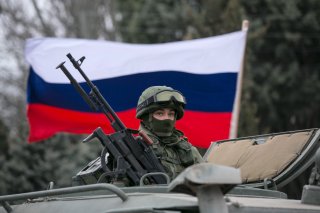 U.S. officials cautioned on Friday that Russia was drawing up plans to carry out a “false flag” operation to give Moscow a pretext to intervene in Ukraine.

National Security Advisor Jake Sullivan outlined the plan on Friday, suggesting that Russian troops were “laying the groundwork to have the option of fabricating a pretext for an invasion.”

White House press secretary Jen Psaki later corroborated Sullivan’s account, stating that the government “ha[d] information that indicates Russia has already prepositioned a group of operatives to conduct a false flag operation in eastern Ukraine.” The press secretary claimed that the Russian operatives in question had received training in urban warfare and explosives, skills that could be used in a potential sabotage operation.

Russia has amassed roughly 100,000 troops on its border with Ukraine, leading many observers to fear that the Kremlin intends to intervene in its western neighbor and former client state. Russian officials have denied that they plan to invade Ukraine and have argued that Russia has a right to deploy its armed forces anywhere in Russia. Russian leaders have also expressed frustration with NATO’s eastward expansion, claiming that eastern European nations’ cooperation with the military alliance poses a direct threat to Russia’s national security.

As a condition for withdrawing Russian troops from the border, President Vladimir Putin has demanded a commitment from NATO to not allow Ukraine to join the alliance. NATO representatives and Western diplomats quickly rejected Putin’s demand.

Tensions between Ukraine and Russia increased over the past week as talks between the United States, NATO, and Russia failed to result in substantial progress. Dozens of Ukrainian websites, including that of the Ukrainian Ministry of Foreign Affairs, were hacked on Friday to display a statement warning Ukrainians to “be afraid and wait for the worst.”

The Ukrainian government implicated the Russian government in the hack. Psaki said that the Biden administration was “concerned” by the incident, but indicated that U.S. officials had not yet determined who was responsible for the attack.

“False flag” operations occur when representatives of one government intentionally misrepresent their identity while committing an objectionable action. They are usually used to refer to governments that stage attacks on themselves in order to justify military action against others. In one notable case, World War II began after German troops staged a “Polish” attack on a German radio station.