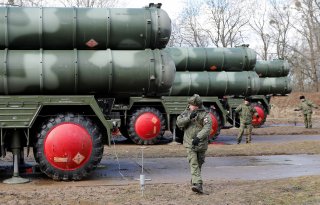 The Russian military will receive three regiments of the S-400 'Triumf' anti-aircraft missile systems along with four sets of the S-350 ‘Vityaz’ battlefield air defense launchers by 2023 under new contracts with the Almaz-Antey defense manufacturer Russian state media reported on Tuesday.

The S-350 ‘Vityaz’ surface-to-air missile system was also been developed by the Almaz-Antey defense manufacturer for battlefield air defense and is capable of striking targets within a maximum radius of sixty kilometers and at a maximum altitude of thirty kilometers. The S-350 is designated to fight both aerodynamic and ballistic targets. An S-350 launcher carries twelve surface-to-air missiles.

The Russia-built S-400 Triumf (NATO reporting name: SA-21 Growler) is the latest long-and medium-range surface-to-air missile system and it is designed to destroy aircraft, cruise and ballistic missiles, and can also be used against ground installations. The S-400 is designed to engage targets at a distance of up to four hundred kilometers and at an altitude of up to thirty kilometers under intensive enemy fire and jamming. It entered service in 2007.

India is among the latest countries to sign a deal with Moscow to acquire the platform. Last month, New Delhi agreed to a $5 billion deal to buy five units of the air defense missile system, and this follows Saudi Arabia’s agreement to purchase the system earlier this year.

Turkey’s purchase of the system has also put a strain on its relationship with the United States, but this week Ankara and Moscow continued negotiations on further implementing the contract on the delivery of S-400 air defense missile systems, Tass reported. Turkey is the first NATO member state to purchase the air defense missile systems from Russia, which announced in September 2017 that it had signed a $2.5 billion deal with the NATO member. Deliveries of S-400 launchers to Turkey began on July 12, 2019.

While the export of the platform has been seen as worrisome—both for how it generated income for Moscow but also in the international prestige that Russia has gained for developing an advanced offensive and defensive weapon system—but also in how it can be employed.

The S-400 is a significant improvement over the S-300, and while the predecessor system was explicitly designed as a long-range air defense system; the S-400 is currently compatible with four missiles. Those can satisfy a wide spectrum of operational categories including the long-range 40N6E (400 kilometers), long-range 48N6 (250 kilometers), medium-range 9M96e2 (120 kilometers) and short-range 9m96e (40 kilometers).

As a result of this most recent deal, in the coming years, Russia will have three more regiments of the platform to contend with!