Is Russia Retreating From the Key City of Kherson? 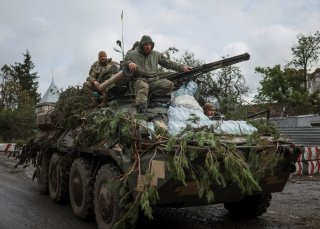 A top Russian occupation official claimed on Thursday that Russian forces could withdraw from the west bank of the Dnipro River, signaling a potential turning point in the Russo-Ukrainian War.

"Most likely our units, our soldiers, will leave for the left [eastern] bank," Kirill Stremousov, the Russian-installed deputy head of the Kherson Military-Civilian Administration, told Russian media outlet Solovyov Live, as reported by Reuters. Stremeusov urged remaining civilians to leave the Kherson region in compliance with local authorities’ ongoing evacuation order. Stremeusov said in the same interview that Russian defensive lines are currently holding, adding that he sees no indications of a large-scale Ukrainian offensive.

Stremeusov has published regular updates on the situation in Kherson through his Telegram channel. The Russian-installed official claimed in a November 2 post that Russian forces successfully repelled a Ukrainian assault in the Kherson region, destroying a Ukrainian military truck in the process. He wrote earlier that Russian troops thwarted a Ukrainian advance in the direction of Beryslav, a city on the left bank of the Dnipro. Stremeusov said in a separate Telegram address, without elaborating, that “difficult decisions” will have to be made in the near future and again urged all civilians remaining in the city to evacuate. According to footage posted by local Russian pro-Kremlin war correspondents, the Russian flag has been pulled down from the city council building; however, a Russian flag can be seen on a building across the street.

The southern regional capital of Kherson, captured by Russian troops in the early stages of the war, is being besieged by Ukrainian forces. Kyrylo Budanov, the head of Ukrainian military intelligence (GUR), told The Hill in late October that he sees no evidence of a Russian military withdrawal from Kherson. “They create the illusion that everything is gone. And at the same time, on the contrary, they bring new military units there and prepare the streets of the city for defense,” he said. Western military experts have assessed that Russian forces are unlikely to leave Kherson unless compelled to do so by force of arms.

Lt. Gen. Viktor Sobolev, a member of Russia’s State Duma, told news outlet NSN that Moscow should not and will not surrender the city. “Kherson is strategically important for us and the troops should not surrender it under any circumstances,” he said. “The evacuation of residents only means that we will fight for the city. We are building up our forces in Ukraine after partial mobilization, and the combat coordination of the mobilized is partially completed. Our forces are growing.”

U.S. defense secretary Lloyd Austin told a news conference on Thursday that Ukrainian forces can retake Kherson, according to Reuters. "On the issue of whether the Ukrainians can take the remaining territory on the west side of the Dnipro river and [in] Kherson, I certainly believe that they have the capability to do that," Austin said.