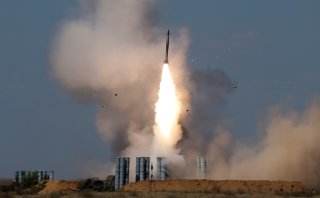 The Russian military has announced the arrival of a new, short-range, high-tech air-defense system capable of supporting the existing S-400s and knocking out incoming ballistic missiles as well as aerodynamic targets.

According to the Russian government’s TASS news agency, this new system, dubbed the Vityaz S-350, represents a technical leap forward in supporting existing air defenses within altitudes of 30 kilometers.

“The S-350 ‘Vityaz’ was engineered by the Almaz-Antey defense manufacturer as a battlefield air defense weapon capable of striking targets within a radius of 60 km and at an altitude of 30 km. The air defense system is designed to fight both aerodynamic and ballistic targets. An S-350 launcher is outfitted with 12 surface-to-air missiles,” TASS reported.

The Russians claim that the new S-350 can destroy both “existing and future air attack weapons,” a claim that is both ambiguous yet ambitious. In some respect, this is nothing new; the Russians have long claimed (without evidence) that their upgraded S-400 and S-500 air defenses are capable of detecting and striking stealth aircraft. And while modern Russian air defenses are believed to be quite advanced, detecting that an aircraft that is in the vicinity is quite different from being able to precisely track, target, and destroy a stealth aircraft moving at high speeds. It is not clear at all that even the most advanced Russian air defenses can actually engage and destroy existing U.S. stealth aircraft, to say nothing of newer stealth applications on emerging platforms like the B-21 Raider stealth bomber and already-airborne six-generation stealth fighter. Both the B-21 and sixth-generation aircraft are likely to incorporate new, paradigm-changing stealth capabilities that have not yet been disclosed.

Nevertheless, as TASS notes, the new Russian system could aid Russia’s air-defense networks by fortifying its longer-range tracking interceptors with a more concentrated system that increases the “density of surface to air fire.” The S-350 also seems to build upon innovations known to be woven into both the S-400 and S-500 surface-to-air systems, including increased networking and data-sharing across otherwise separated fields of view; faster, high-speed computer processing; digital transmission; and multi-node target tracking.

"We have developed a good and compact system that performs all of its functions far better than its predecessors. As its fundamental difference from all other similar systems, the Vityaz is capable of quickly aiming its missiles and scanning the space. The weapon can effectively strike both existing and future air attack weapons," Almaz-Antey’s chief executive said in an interview with the National Defense magazine, TASS said.

The Vityaz also reportedly functions with an anti-jamming technology and large ammunition load, supported by 360-degree sensor fields of view.

“The S-350 is compatible with all air defense systems” the executive said, but he also noted that the system is “capable of providing air defense on its own. There are no other medium-range systems with such characteristics in the world."

Should this emerging S-350 function as described by the Russian report, it could cause problems for attacking close-air-support aircraft that might become increasingly vulnerable to highly-networked, precise, and lower-altitude surface fire.

TASS did not say when this new system might be operational or specify production plans, but it appears that this system is well on its way to giving NATO defense planners new challenges to overcome.