Russia Says Its Hypersonic Missile is Nearing the End of Trials 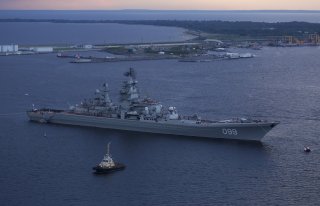 Russia has conducted multiple tests of its 3M22 Tsirkon (Zircon) scramjet-powered maneuvering anti-ship hypersonic cruise missile in the last year-and-a-half. This week, Chief of the Russian General Staff Valery Gerasimov said that the trials of the seaborne platform are successfully nearing their completion.

"The trials of the Tsirkon shipborne missile system are being successfully completed,” Gerasimov said, according to a report from TASS. “These trials proved the possibility of launching this hypersonic missile both from a surface ship and a nuclear-powered submarine from the submerged position."

The Russian Navy ramped up its capabilities in the close-in and distant maritime areas "through the deliveries of advanced submarines and surface ships," he added. "In August this year, six new ships were laid down for the Navy."

Those vessels could be equipped with the Tsirkon, which has an estimated range of one hundred thirty-five to two hundred seventy nautical miles (155 to 311 mi; 250 to 500 km) at low level, and up to four hundred nmi (460 mi; 740 km) in a semi-ballistic trajectory. The missile can travel at a speed of Mach 8–Mach 9, and along with its ability to maneuver during flight could make it extremely difficult to counter.

The 3M22 Tsirkon will be first deployed with the Russian Navy's Kirov-class battlecruisers Admiral Nakhimov and Pyotr Velikiy, while there are reports that it could also be employed on the Admiral Grigorovich-class and Admiral Gorshkov-class frigates, and perhaps even the Gremyashchiy-class, Buyan-class and Karakurt-class corvettes.

In his February 2019 State of the Nation Address to the Federal Assembly, Russian President Vladimir Putin said work on the Tsirkon hypersonic missile had been proceeding as scheduled. The Russian leader added that the missile platform was capable of reaching speeds of about Mach 9 and that its strike range exceeded 1,000 km (600 miles). At such speeds, it could reach a target at that distance in just seven minutes.

The Tsirkon has been in development for more than twenty years and has been seen as a key next step for Putin's military buildup.

Russia has not been alone in its development of hypersonic weapons. China may have conducted its first test of such a platform earlier in 2021 in a launch over the South China Sea. The United States has also been seeking to develop such a weapon, but has faced a number of setbacks.

Last month, Gen. David Thompson, vice chief of space operations, also sounded alarms last month when he warned that the U.S. hypersonic programs were "not as advanced" as those of Russia or China. However, the United States is moving forward with multiple efforts, and the hope is that the Department of Defense – which certainly hasn't placed all its proverbial eggs in one hypersonic basket – could catch up. It may need to work at hypersonic speed to do so, however.