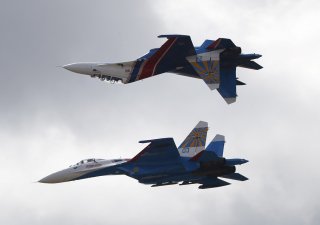 In late August in a single-day mission, six B-52 bombers took part in the "Allied Sky" flyover, crossing 30 NATO countries to highlight solidarity with U.S. partners and allies. Four of the Cold War-era bombers, which were deployed from Royal Air Force (RAF) Fairford, flew across Europe likely to send a strong message to Russia.

That message may have been received as Russia launched two Su-27 fighters to intercept two U.S. Air Force B-52s that were taking part on a patrol mission over the Black Sea on Wednesday, September 23. While it is unclear if the bombers were also from RAF Fairford, the Air Force has been regularly conducting Bomber Task Force (BTF) missions across the European theater of operations since 2018.

According to the Russian National Defense Control Center, two air targets were detected over the neutral waters of the Black Sea and were approaching Russian airspace.

"Two Su-27 fighter jets of the Southern Military District's air defense units on duty were scrambled to identify the air targets and to prevent their unauthorized incursion into the Russian airspace," the Control Center told state media. "The crews of the Russian fighter aircraft identified the air targets as B-52N strategic bombers of the U.S. Air Force and escorted them over the Black Sea."

The Control Center added that the bombers turned away and afterward the Su-27 fighter jets returned to base.

"All the flights of the Russian fighter jets were conducted in strict compliance with international airspace rules," the center reported. "No violation of the state border of the Russian Federation was allowed."

The pair of B-52 bombers, which are capable of carrying nuclear weapons, had also reportedly entered Ukrainian airspace within the framework of security cooperation earlier in the day.

While the intercept took part in September 2020, it could have seemed like something from the 1980s as both the bombers and fighters are models likely as old (or older) than the pilots flying the respective aircraft.

The Su-27 Flanker is a fourth-generation fighter that was the last major fighter to enter service with the Soviet Air Force. Intended both to defeat U.S. fighters over central Europe in a NATO-Warsaw Pact conflict and to patrol the airspace of the Soviet Union against U.S. bomber incursions, the Su-27 survived the end of the Cold War to become one of the world’s premier export fighters.

It should also be noted that perhaps the Russian National Defense Control Center should brush up on its aircraft identification as it "identified the air targets as B-52N strategic bombers" despite that fact that there is no B-52N – and the Air Force currently operates the B-52H Stratofortress. It is confusing because the English equivalent for "H" is the "khah" but its symbol is "X."

Defense Blog confirmed that the aircraft was in fact B-52H bombers – assigned to the 5th Bomb Wing at Minot Air Force Base (AFB), North Dakota – that integrated with Ukrainian fighter jets during a Bomber Task Force Europe mission.

Clearly, something was simply lost in translation – but this wasn't the first time. Earlier this month Chief of the Main Operations Directorate of Russia’s General Staff Sergei Rudsko made the claim that the U.S. Navy was operating an aircraft carrier in the Black Sea as well when in fact it wasn't a carrier but rather was the Arleigh Burke-class guided-missile destroyer USS Roosevelt (DDG 80).