Russia Showcased Its Top 5 Weapons During the Victory Day Parade 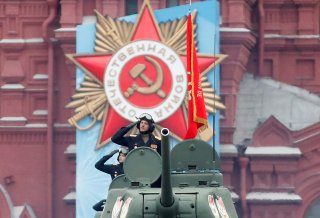 Russia’s annual Victory Day parade commemorating the anniversary of the Soviet victory over Nazi Germany has steadily grown in recent decades to become the country’s most important holiday, according to a majority of Russians. But the parade is also one of the largest annual displays of the Kremlin’s military might, showcasing Russia’s latest and most prolific weapon systems. Here are five of the top pieces of modern military hardware that made an appearance during this year’s parade.

This year’s mobile column was prominently represented by heavy armored vehicles from Russia’s new Armata Universal Combat Platform. The T-14 Armata is Russia’s modernized flagship main battle tank (MBT), boasting a slew of advanced features to match—if not exceed—the best that NATO’s MBT roster has to offer. Meanwhile, the T-15 Armata is a heavy infantry fighting vehicle (IFV) that shares the T-14’s hull and borrows numerous other design features from its MBT counterpart. There is no direct NATO analogue to the T-15, which occupies a role somewhere between an IFV and an armored personnel carrier. At a whopping forty-eight tons, the T-15 is heavier than any tank currently serving in Russia’s armed forces other than the T-14.

The only intercontinental ballistic missile (ICBM) shown at this year’s parade, the RS-24 Yars-- also known as the SS-27 Mod 2—is widely believed to be a variant of the older Topol-M (SS-27). Yars is reportedly equipped with at least three multiple independent reentry vehicle warheads, as opposed to the original Topol-M’s single 800-kiloton warhead. Experts believe that Yars exists in both mobile and silo-based variants. With as many as 135 mobile systems currently in service, the Yars ICBM is well on track to replace a great swathe of Russia’s remaining Topol and Topol-M units.

One of Russia’s most unique new defense products, Uran-9 is an unmanned combat ground vehicle (UCGV)—in essence, a drone tank—introduced in 2019. Armed with a prodigious weapons suite, the Uran-9 is designed to bring massive firepower to high-intensity combat operations without endangering the lives of Russian personnel. It was recently revealed that Uran-9 saw a limited trial run during the Syrian Civil War. There are conflicting accounts as to how the UCGV performed in Syria, with some sources alleging that the drone tank suffered from constricted range and subpar targeting capabilities.

The Kh-47M2 Kinzhal missile, which made its parade debut in 2018, was carried by a modified MiG-31K interceptor as part of this year’s flypast column. Kinzhal is an air-launched, hypersonic, nuclear capable ballistic missile that boasts a top speed of up to Mach 13 and a maximum range of around three thousand kilometers. With its sheer speed and maneuverability, the missile not only threatens U.S. military assets like carrier strike groups but can potentially penetrate U.S. missile defense networks. The Kinzhal is one of several hypersonic weapons unveiled during Russian president Vladimir Putin’s 2018 state-of-the-nation address.

A longtime Victory Parade staple, the S-400 Triumf has earned the undisputed title of Russia’s most advanced missile defense system. Through a series of high-profile contracts with Turkey, India, and China, the S-400 has likewise become the face of Russia’s high-end defense export industry. The S-400 is not only more capable but significantly more versatile than its S-300 predecessor, boasting four distinct missile types that support effective performance at short- to very-long ranges. The S-400 can track and target manned aircraft, drones, cruise missiles, and ballistic missiles at a range of up to four hundred kilometers.