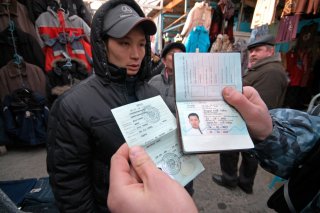 Migration is simultaneously a solution and a challenge, though not for the same reasons. Migration injects workers into labor markets that suffer from aging populations, solving a structural problem, but is often met with resistance by native populations, which is a challenge created by political discourse. The tension between these two aspects of migration is rarely solved through any particular set of policy choices because as soon as the policy ink is dry, rules and their enforcement enter the public discourse where they are shaped and used towards political ends. The political tension is readily apparent in the United States and European migration destinations like Germany. But it is also visible in places like Russia.

Millions of labor migrants from Central Asian countries such as Tajikistan, Uzbekistan, and Kyrgyzstan travel to Russia each year to work in construction and the service industry. Russia’s economy offers job possibilities that are more lucrative than what workers can find at home, and migration becomes a life and investment strategy for many Central Asian families. Russia itself depends on these workers to keep its industries thriving. When the Covid-19 pandemic hit, many businesses shut down during widespread lockdowns, and a number of migrants left Russia. As the economy came back online, the labor deficit became starkly apparent and many have called for simplified documentation procedures and exemptions to pandemic-related border closures to attract migrants back to Russia quickly. This was Russia’s Day Without a Mexican moment.

Will the open and public demand for more foreign workers change how people perceive migrants in society or how politicians talk about migration issues? This is less certain. In Russia, like many other countries that host a large foreign labor force, the political discourse about migration is contentious. Nationalist voices, including that of opposition figure Alexey Navalny, continually seek to mobilize political support by demonizing migrants and calling for increased restrictions. Technocrats with policymaking power often respond by tweaking policies that aim to respond to these voices but fail to see migrants themselves as an essential part of the equation. Rather, migrants are seen as pawns that if managed, moved, or adjusted correctly, will respond in predictable ways.

Migration is messy because it is a process wherein humans do not act with full information. Migrants and policymakers alike act within relational human systems that cannot be distilled down to cost-benefit calculations by rational actors. The people in migration systems act intuitively, responsively, defensively, and in other human ways. Central Asian migrants are often motivated by earning money in Russia, but these earnings are not simply economics. They are embedded in ideas of prestige, traditions, and long-term investment strategies for extended families.

Migration politics tend to reduce these complex human systems into categories that can be measured and projected to the public as reality. These simplified truths can then be mobilized into binary logics and discourses, in some cases producing polarized politics as we see in the West. Russia’s politics of migration are far less polarized than those in the United States, but they are every bit as simplified in their treatment of migrants as problematic data points rather than human beings.

The circulation of skills and knowledge that allows migration to be a solution to demographic challenges requires maximally open and minimally bureaucratized or securitized borders. Politicians more readily acknowledge these dynamics related to highly-skilled migration because it is less politically costly. But the same necessity holds for migrants of all skill levels. The idea that migration is a problem is political in its making, yet becomes real to people when reiterated enough by politicians and the media. This involves cheap political gains made at the expense of human beings impacted by rhetoric and policy, thereby ignoring the contributions migrants make.

Politicians also ignore the complexity of policymaking and implementation. There are no perfect policies. Even the most well-designed policies have both successes and failures once they encounter real-world conditions. Some people will be relatively satisfied by policy choices while others will remain dissatisfied. It is the job of policymakers to address these dissatisfactions with understanding and empathy for all actors involved rather than political rhetoric. If politicians changed how they talk about migration, we would all be better for it.

Caress Schenk is an Associate Professor of political science at Nazarbayev University (Astana, Kazakhstan) and the author of Why Control Immigration? Strategic Uses of Migration Management in Russia.