Russia Stands No Chance Against the Enhanced B-2 Stealth Bomber 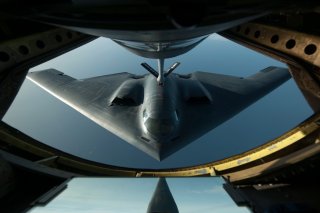 As the U.S. Air Force B-21 Raider prepares for its first flight, aircraft developers are also surging ahead with upgrading computer systems, sensors, and weapons capabilities to the fleet of B-2 stealth bombers.

The near-term plan is to ensure that the B-2 bomber can remain effective against highly advanced air defenses for at least another decade until more B-21s arrive. The concept is for these stealth bombers to fly alongside each other and since the highly secret B-21 is believed to incorporate paradigm-changing stealth technology, the U.S. Air Force is working to ensure its B-2 bombers remain competitive.

The upgrades to the B-2 are multifaceted and span a wide range of technological advancements including more secure high-frequency radio communications, a new computer processor that is 1,000 times faster, and upgrades to the B-61 nuclear bomb.

In recent years, the U.S. Air Force has been making rapid progress with several critical upgrades to the B-2 through the addition of sensors known as the Defensive Management System. These new sensors enable the B-2 to locate and elude enemy air defenses. This is particularly critical as a new generation of Russian air defenses may be able to track stealth aircraft. The Russian media has made this claim, although it is unclear whether it has been verified. Additionally, “seeing” a target and establishing a radar track to engage it is not the same capability. Still, Russian air defense systems should be taken seriously since they have longer ranges and high-speed digital processors to network air defenses, share target tracking data, and provide blanket coverage. They also operate on a growing number of frequencies, although there is a disparity between the ability of low-frequency surveillance radar to locate a stealth aircraft and high-frequency engagement radar’s capability to sustain a smaller and narrower track on a moving target.

While the specifics of how stealth bombers may perform against specific radar systems, such as Russia’s upgraded S-400 or newer S-500 missile defense systems, are likely not publicly available for security reasons, senior U.S. Air Force leaders have said that stealth configuration, coating, thermal signature management, and radar-absorbing materials are only “one arrow” in the quiver when it comes to defeating enemy air defenses.

This seems quite relevant to the B-2s Defensive Management System. The new advanced sensors are engineered to locate enemy air defenses so that B-2 bombers can elude them to minimize risk

It is not clear exactly how long the B-2 will fly, however, significant steps are being taken to ensure it can compete against a technologically advanced adversary.