Russia Sukhoi Su-34 Fullback Is About to Get Even Deadlier 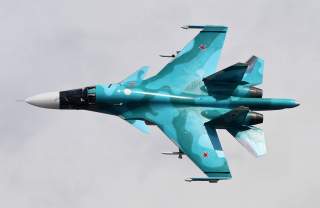 The Sukhoi Su-34 Fullback, Russia’s staple strike aircraft, is slated to undergo its first major modernization update since the fighter’s introduction in 2014.

The timeframe and scope of the modernization contract remains unclear, as do any prospective plans to refit Russia’s current 100+ strong Su-34 fleet with the latest upgrade package. The modernization program was scheduled to begin in 2018, which raises a pointed logistical question: why is the Su-34 being updated so soon after its release? A four-year aircraft modernization cycle is, after all, well outside the norm for Russia’s military aircraft industry.

There are several factors play. First, the Su-34 concept is significantly older than it seems. development work began back in the early 1980’s, and the tactical bomber likely would have flown by the end of the 20st century were it not for the Soviet collapse. The project stalled from a lack of funding until 2005, when the VKS opted to revitalize it with a modern avionics package similar to one found on the Tu-22M3M and upcoming Tu-160M2: digitized controls, improved electronic countermeasure (ECM) tools, and navigation system improvements. But there is yet more work to be done; the VKS is interested in ECM-specialized Su-34 variants, which-- when outfitted with the L700 “Tarantul” electronic warfare (EW)  system-- can reportedly provide radar cover for an entire fighter strike group.

Secondly, the VKS seeks to incorporate lessons from the Su-34’s recent combat experience in the Syrian Civil War. The fighter reportedly performed well in a series of airstrikes against ISIS targets and was even hailed as the most advanced Russian aircraft to be deployed in Syria, but Sukhoi seeks to implement further tweaks to enhance the Su-34’s combat efficacy. The Su-34 currently boasts twelve hardpoints that are capable of mounting a wide array air-to-air, anti-ship missiles, and guided bombs from the KAB 500/1500 family. Russian defense media reports that the modernization package seeks to introduce still more weapons to the Su-34’s already-formidable armament suite, though specifics remain elusive.

Finally, the Russian defense industry could be looking to make the Su-34 more attractive for export purposes. This modernization news comes amid ongoing rumors that Ankara is evaluating the Su-34 as a prospective procurement option after Turkey’s recent ejection from the F-35 program. Turkey’s foreign minister Mevlut Cavusoglu has previously entertained the possibility of a Su-34 contract: “If the F-35s don’t work out, I will again have to procure the jets I need from elsewhere . . . There are (Russian) Su-34, Su-57 and others. I will absolutely meet my needs from somewhere until I can produce it myself,” he said in April of this year, months before the fallout from Turkey’s decision to purchase the Russian S-400 missile defense system. Cavusoglu’s comment was made in a rather offhand fashion, but-- as previously explained by The National Interest-- the Su-34 could turn out to be a cost-effective stopgap to satisfy Turkey’s air-to-ground needs while the Turkish defense industry begins serial production of their homegrown “TF-X” fifth generation fighter.