Russia In Talks to Export S-400 Missile Defense System. Is Anyone Buying? 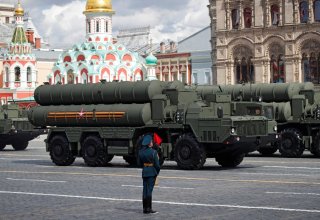 Moscow is engaged in active talks on possible S-400 export contracts, according to a top Russian arms industry official.

The S-400 “Triumf” is an advanced surface-to-air missile (SAM) system that was introduced in 2007 as the successor to the S-300 SAM. The S-400 can operate from short to very long ranges of up to 400km and is capable of engaging aircraft, ballistic and cruise missiles, and drones. As many as twenty-five S-400 regiments are currently serving in Russia’s Armed Forces. China became the first foreign buyer of the S-400 in 2014, followed by India and Turkey. Belarusian leader Aleksandr Lukashenko revealed in August that Minsk is in the final stage of negotiations to procure an unspecified number of S-400 systems at a deeply discounted price.

Mikheyev noted that Russia has begun delivering S-400 missile defense systems to India “ahead of schedule,” adding that New Delhi is slated to receive its first S-400 regiment by the end of this year. “All the materiel of the first regiment set will be delivered to India at the end of 2021. Immediately after the New Year, our specialists will arrive in India for the equipment transfer at the sites where it will be stationed,” Mikheyev said. India first announced plans to purchase S-400 systems in 2015. Moscow and New Delhi inked a $5.43 billion deal for the delivery of five S-400 regiments in 2018, part of a larger defense contract that also involves the sale of four Admiral Grigorovich-class frigates and a joint venture in Ka-226T helicopter production. The delivery risks triggering U.S. sanctions under the “Countering America’s Adversaries Through Sanctions Act“ (CAATSA), a law partly intended to impose economic penalties on governments that import Russian military hardware. According to analysis conducted by the Heritage Foundation, a think tank based in Washington, D.C, India appears to be eligible for a CAATSA waiver that would exempt New Delhi from U.S. sanctions over its decision to purchase the S-400. The Biden Administration has yet to announce whether or not it intends to extend a CAATSA waiver to India.