Russia Testing New Tank That Lands From the Sky 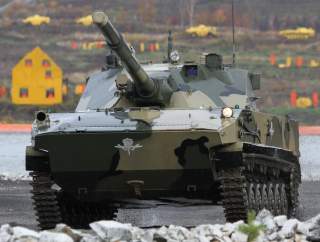 Russia will begin testing a new airborne tank destroyer this fall, according to Russia media.

Though Russia designates the Sprut SDM1 as an anti-tank vehicle, it more resembles a light tank. But whatever it is, the Sprut is part of a unique line of vehicles that has made Russia the only modern power that routinely uses armor parachuted from planes, notably the BMD-4 air-droppable infantry fighting vehicle (though China does field the WZ506 airborne IFV). The last American armored vehicle designed to be dropped out of a plane was the M551 Sheridan, a 1960slight tank armed with a 152-millimeter cannon/missile launcher: deployed to the jungles of Vietnam, where its thin armor and fragile ammunition proved troublesome, the vehicle was soon relegated to training duties.

But when Russia says airborne tank, it means airborne tank: Russia and the Soviet Union both drop their armored vehicles with their crews inside the vehicle. The Sprut-SDM1, designated a self-propelled anti-tank gun (SPATG), is both air-droppable and amphibious. "The SPATG has a full combat weight of 18 tons, and its crew totals three (a commander, a gunner and a driver)," according to TASS.

The vehicle is powered by a UTD-29 diesel multifuel engine with a power output of 500 hp that produces a speed of up to 70 km/h on road and up to 7 km/h in water.

The Sprut-SDM1`s armament suite incorporates a 2A75 125 mm smoothbore main gun, a coaxial PKTM 7.62 mm medium machine gun and a PKTM machine gun integrated with a roof-mounted remotely controlled weapon station. The 2A75 is coupled to an autoloader that drastically increases its firing rate. The gun can fire anti-tank guided missiles (ATGM). The self-propelled gun is also fitted with six Tucha-type smoke dischargers mounted on the turret. The SPATG is based on the chassis of the newest BMD-4M airborne infantry fighting vehicle (AIFV)." The Sprut punches above its weight,  with a 125-millimeter cannon similar to those found on Russian main battle tanks, and a sophisticated fire control system.  "The Sprut-SDM1 is a reliable vehicle that can be operated in mountainous terrain and hot climates," TASS notes. "The vehicle also features a high power-to-weight ratio."

But nothing comes for free in tank design. The price of light weight and heavy firepower is a thin skin. The Sprut's armor is only proof against weapons up to 12.7 millimeter (.50-inch caliber) heavy machine guns.

In that sense, it is actually closer to the U.S. concept of tank destroyers, or at least when the U.S. last fielded them in World War II. The American M-10 and M-18 had a turret and gun equivalent to a tank, but with thinner armor. The problem was that they were supposed to be used in hit-and-run ambushes -- kind of today's anti-tank guided missiles -- but ended up being used in the field as tanks where their lack of protection proved a disadvantage. In contrast, the Nazis and Soviets tended to use heavily armored, turretless vehicles with big guns -- such as the notorious 80-ton Jagdtiger, which were survivable but certainly not air-droppable.

But Russia's airborne armor, even if thin-skinned, does address the Achilles heel of airborne troops. Ever since World War II, the biggest danger to paratroopers has been their vulnerability to enemy armor, as the British 1st Airborne Division discovered at Arnhem in 1944. Airborne operations have tended to be a race between enemy armor rushing to destroy the airborne bridgehead before friendly armor can relieve the paratroopers. Even with man-portable anti-tank missiles and rockets, sky-troopers become lightly armed soldiers moving on foot once they land. While a fragile weapon, the Sprut at least gives them a semblance of armor support on the defense, and mobile, armored firepower -- in other words, a tank -- on the offense.