Russia Wants To Build Its Very Own 'B-2 Stealth Bomber'. Here Come the Problems. 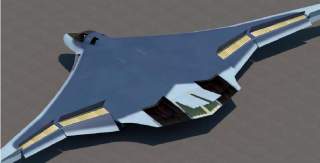