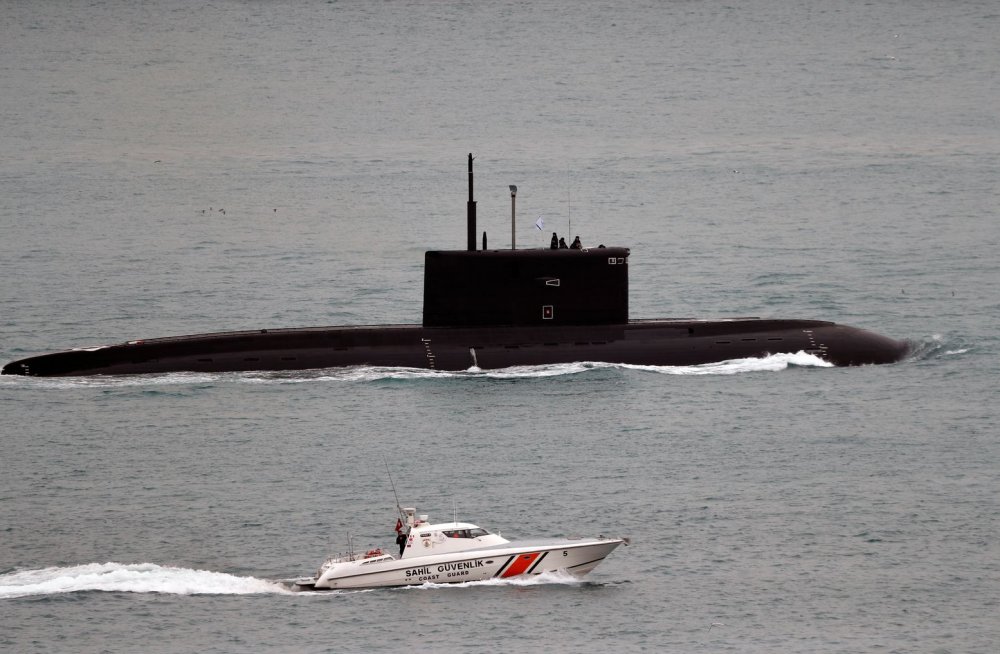 Key point: Moscow wants to keep its nuclear deterrence up, but this is another level.

For decades, submarine nuclear deterrence has been uniquely provided by the nuclear-powered ballistic missile submarine (SSBN), designed to loft missiles from beneath the waves into space before releasing multiple nuclear warheads that rain hellfire on cities and military bases below. SSBNs can remain submerged basically indefinitely thanks to their nuclear reactors, and are thus unlikely to be all hunted down prior to launch orders being issued.

However, while Russia is planning to fully replace its older SSBNs with eight ultra-quiet Borei-class boats (detailed in a companion article), it is embarking on a radical new direction by also ordering four Khabarovsk-class nuclear-powered submarine drone-torpedo carriers, or SSDNs.

The Poseidon drone torpedo, also codenamed Status-6 by Russia and Kanyon by NATO, was for years the subject of rumor and skepticism, seeming too fantastical to be real. But by 2016, Pentagon reports confirmed the torpedo’s existence, and in March 2018 Putin publicly unveiled a 3D-animated video showing Poseidon attacking a city and a carrier task force. Later, real-life footage of a Poseidon being launched was released as well.

No Western source has better documented and collected imagery of Poseidon and its launch platforms than naval analyst H.I. Sutton, whose years of open-source research substantially informed this piece.

By now, two submarines appear to have been built specifically to launch the Poseidon, starting with the Sarov, an experimental diesel-electric submarine with a small nuclear-reactor dedicated to charging its batteries.

Then in April 2019, Russia launched the Project 9852 Belgorod, an extremely versatile “special-projects” submarine adapted from the hull of an unfinished Oscar-II class cruise missile submarine. The Belgorod is a massive one-of-a-kind vessel that can launch unmanned Klavesin-2R underwater drone submarines (UUVs), dock manned Losharik mini-submarines on its belly which can tap into underwater communication cables or perform spy missions, and it has six gigantic tubes in its bow for launching Poseidon torpedoes

However, Russia has announced it plans to field thirty-two Poseidon torpedoes, and the Belgorod’s Swiss-Army knife-like versatility is not suitable for mass deployment. That’s where the forthcoming submarine Khabarovsk, laid down in 2014, comes in.

A Russian flyer reveals the 10,000-ton Khabarovsk resembles a large Borei­-class SSBN, shortened from 170 to roughly 120 meters, but still featuring its very quiet pump jet propulsion. It can carry six or possibly eight Poseidons instead of ballistic missiles. Two large blisters near its bow may be separate pressure hulls, possibly accommodating conventional heavyweight torpedoes for self-defense.

Four Khabarovsk are slated for service in Russia’s Northern (Atlantic) and Pacific fleets. However, Michael Kofman, an expert on the Russian military at the Center for Naval Analysis, wrote in a blog post that oceanic geography would make hitting U.S. West Coast targets more viable:

…I mention Pacific cities [because] a deep diving weapon doesn’t make as much sense coming from Russia via GIUK gap into the Atlantic, simply because of the depths and geographical choke points involved… The Pacific on the other hand lends itself handily to deep diving autonomous weapons if they’re ‘fire and forget.’

A possible successor to the Khabarovsk, the mysterious Project 9853, may also be intended to carry Poseidons.

The Poseidon is the largest torpedo ever built, measuring approximately twenty-four meters long and 1.6-meters in diameter. Using a tiny nuclear reactor to power a pump-jet propulsion system, the Poseidon can traverse thousands of miles across oceans, autonomously navigating around obstacles and evading interception. U.S. intelligence estimates the Poseidon will complete testing by 2025 and enter operational service in 2027.

There remain large question-marks on the Poseidon’s exact capabilities and its operational concept.

The Poseidon has been claimed to be capable of blistering-fast speeds of 100 knots, acoustic stealth, and diving as deep as 1,000 meters.

Of these claims, Poseidon’s low operating depth is considered most credible. By itself, this would render interception extremely difficult with current technology. For comparison, U.S. attack submarines (officially) operate down to 240 meters and travel up to 30 knots. Their Mark 48 torpedoes can accelerate to 55 knots and are not rated for much deeper than 800 meters.

The speed claims appear more dubious. Achieving 100 knots implies super-cavitating propulsion such as used by the Russian Shkval or Iranian Hoot torpedo, which use heat to create an air-bubble around the torpedo so it can race forward without water-induced drag. However, Sutton points out that the Poseidon’s pump jet is not compatible with that, nor does it boast the large steering fins necessary to pierce the bubble for maneuvers.

Instead, both Western analysts and Russian media now claim a more credible speed of 56-70 knots.

Acoustic stealth is also not highly compatible with tearing through the ocean at over a mile a minute. One possibility is that the Poseidon is designed to cruise slowly and stealthily, and then accelerates to high speeds for its terminal approach. However, swimming a kilometer deep at 50-70 knots by itself makes interception extremely difficult using existing NATO systems, so acoustic stealth may not be a priority.

The Poseidon was also initially claimed to carry a gigantic 100-megaton warhead, possibly a cobalt-salt bomb designed to wipe out cities with a radioactive tsunami wave. However, Russian media articles have since admitted a less ridiculous 2-megaton payload employing more conventional kill mechanisms.

Another lingering question is just how autonomous is the Poseidon? The term “drone” implies remote command mechanisms, which are usually desirable in a strategic weapons system. However, a torpedo swimming at the bottom of the seafloor is unlikely to be able to maintain continuous communication links, and will likely advance upon targets with a high degree of autonomy.

What’s the Poseidon even for?

What do Khabarovsk-class SSDNs do for Russia that its existing SSBNs can’t do better? After all, ballistic missiles could hit the United States in a half-hour while drone torpedoes might require days to reach their targets across the ocean.

In an email in 2018, Kofman wrote me that the Poseidon amounted to a “third-strike” revenge weapon, guaranteeing annihilation of an adversary’s coastal cities, even should Russia’s own nuclear forces be annihilated in a first strike.

Moscow may perceive the Poseidon as a counter to U.S. ballistic-missile defense. Simple math suffices to point out that the roughly fifty-ish GMD ballistic missile interceptors deployed by the United States could not stop Russia’s stockpile of 1,500 nuclear missiles, but Kofman wrote that Russia might fear a precise U.S. first strike could wipe out enough of Russia’s nukes that the survivors left for the second strike could be “mopped up” by mature ABM weapons.

But if the Poseidon has virtually unlimited range, why does it require expensive submarines to launch it at sea rather than from a dock or a coastal platform? Indeed, there may be a “Skif” Poseidon variant designed to be installed for launch from the sea floor.

Putin’s presentation emphasized the Poseidon could be used tactically to wipe out a carrier task force (CFT). However, a CTF is usually moving at 30 knots and musters dense and formidable anti-submarine defenses, unlike a coastal city. Cueing a moving target for missiles like the Chinese DF-21D that can travel many times the speed of sound is already a highly challenging task. Attempting the same operation with an underwater vehicle cruising at 50-100 knots, with weaker communication links, poses an exponentially greater one.

An SSDN, however, could simplify the engagement chain by releasing the Poseidon closer to the carriers. The Poseidon is believed to have an active sonar in its nose, which could be used to map the ocean floor for navigation purposes, but might also enable hunter-killer engagement.

Though the tactical application of the Poseidon still seems difficult to operationalize, it does pose worrying problems in that Russia may escalate to use of tactical nuclear weapons without perceiving those as necessarily provoking a wider strategic nuclear exchange.

While the Poseidon doesn’t fundamentally alter the balance of power, nor the horrifying destructiveness of nuclear war, it does show that humanity is inclined to continue devising ingenious but largely redundant new weapons of mass destruction.

Sébastien Roblin holds a master’s degree in conflict resolution from Georgetown University and served as a university instructor for the Peace Corps in China. He has also worked in education, editing, and refugee resettlement in France and the United States. He currently writes on security and military history for War Is Boring. This first appeared in June 2019.