Russia Wants You To Know It's Developing a New Hypersonic Missile 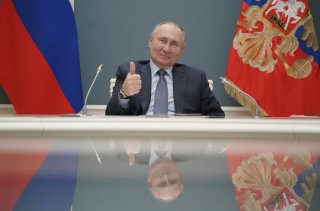 “Today supremacy in the air is a vital condition for ground and naval groupings of troops (forces) to conduct combat operations successfully,” Colonel-General Vladimir Zarudnitsky wrote in the August 2021 edition of the Russian journal Military Thought. “For this purpose, Russia is developing and accepting such advanced and upgraded armaments, military and special hardware for service in its Aerospace Force as the Tu-160M strategic missile-carrying bomber, the Kinzhal airborne hypersonic missile system and long-range air-launched precision weapons, in particular, the X-95 hypersonic missile.”

The letter “X” is transliterated in English as “Kh,” hence the name Kh-95. The announcement was rather unceremoniously buried in a longer paragraph on the bottom of the forty-first page, suggesting that Zarudnitsky was potentially unaware that this missile had not yet been unveiled or even leaked.

State news outlet RIA Novosti confirmed the existence of the missile with a “source in the military-industrial complex,” who added that the Kh-95 will be compatible with the Tu-23M, Tu-160M, and Russia’s upcoming PAK-DA bomber. “Prototypes of the new product [Kh-95 missile] have already been tested from air-launched platforms,” the source noted, without offering any additional details on the content and frequency of these prior tests. It is not yet clear if the Kh-95 will be compatible with the more advanced Tu-23M3M and Tu-160M2 variants.

Russia has invested heavily into hypersonic weapons technology in prior years—many of these new systems, including the Kh-47M2 Kinzhal air-launched ballistic missile and Avangard hypersonic glide vehicle, have already entered service, albeit in relatively small quantities. Others, like the Tsirkon winged, anti-ship hypersonic cruise missile, are in the latter stages of state trials.

So, how will the Kh-95 distinguish itself in the Kremlin’s increasingly saturated hypersonic catalog? Defense expert Mikhail Khodarenok argued that the performance capabilities of Russia’s latest bombers are being wasted on older missiles that are increasingly irrelevant in the context of modern high-intensity ground strike missions. Russia’s military, he added, has a clear and pressing operational requirement for a hypersonic, air-launched cruise missile with an operational range of no less than 5,500 kilometers. With a weapon of this kind, Khodarenok believes that Russia’s Air Force can launch devastating standoff strikes against key American assets and infrastructure whilst staying out of the effective operating range of U.S. interceptors. “This is why the development of such a missile [Kh-95] for the country’s Long-Range Aviation forces presents such a timely and important task,” he noted.

Nevertheless, Khodarekok warned of a parallel problem: there currently are not enough modernized bombers in Russia’s inventory to fully leverage the capabilities offered by long-range, air-launched hypersonic cruise missiles. The expert called for a sweeping procurement program involving as many as forty PAK-DA, forty Tu-160M, and forty Tu-22M3M bombers, spread across six regiments.