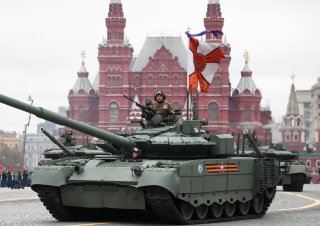 Russia took direct aim at the West on Thursday by asserting that continual cyberattacks against its infrastructure risked leading to a “direct military clash.”

“The militarization of the information space by the West and attempts to turn it into an arena of interstate confrontation, have greatly increased the threat of a direct military clash with unpredictable consequences,” the Russian Foreign Ministry’s head of international information security said in a statement, per Reuters.

The statement continued by saying that Washington was “deliberately lowering the threshold for the combat use” of information technology (IT).

The warning came after the Russian Housing Ministry's website appeared to be hacked this past weekend, with traffic to the site redirecting to a “Glory to Ukraine” sign. Reuters reported that the Foreign Ministry’s statement blamed individuals based in the United States and Ukraine for the attacks.

“All our steps will be measured, targeted, in accordance with our legislation and international law,” it continued.

Earlier this week, Zhao Lijian, spokesperson of China’s Ministry of Foreign Affairs, said that such cyber activities “could lead to an escalation in the Russia-Ukraine conflict and even risk triggering nuclear war.”

He added: “The U.S. needs to explain to the international community how these ‘hacking operations’ are consistent with its professed position of not engaging directly in the Russia-Ukraine conflict.”

Reuters noted that ever since Russia invaded Ukraine in late February, the websites of many state-owned companies and news organizations have been the target of several hacking attempts. In May, President Vladimir Putin contended that the number of cyberattacks on Russia by foreign “state structures” had increased substantially and called on the nation to further strengthen its IT security.

As reported by Tech Monitor, it has been somewhat surprising for some experts to witness this many cyberattacks against Russia over the course of the Ukraine conflict.

“We are definitely seeing a heavier emphasis on engagement in cyberspace than we imagined at the start of the current phase of the war,” Greg Austin, program lead in Cyber Space and Future Conflict at the International Institute for Strategic Studies, told the site.

He also believed that it is quite ironic for Russia to call out the West for its role in cyberattacks, considering that Putin’s government has regularly conducted similar operations in recent years.

“Generally, the country doing most of the attacking has been Russia. So, for Russia to say that the U.S. is militarizing cyberspace is the pot calling the kettle black,” Austin said, adding that he fully expects the West to continue its cyber offensive going forward.

“The Americans are already engaged in defense-forward operations. Now that they’ve become much more robust towards Russia and their policy is to weaken Russia, it would not surprise me that they would move up a significant gear in terms of operations in cyberspace,” he concluded.